Verwandte Artikel zu Probability and the Weighing of Evidence. 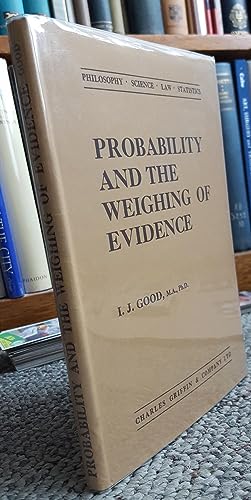 Probability and the Weighing of Evidence.

First Edition. 119 pp. Original cloth. Near Fine, in near fine dust jacket. Good 'was a cryptologist, statistician and early worker on Colossus at Bletchley Park and the University of Manchester. This book expanded on the concept of Alan Turing's Unit 'deciban' which measured the smallest weight of evidence perceptible to the intuition. Rare' (Dominic Winter Auctions Web site). A copy of this book sold at Winter on Dec. 12, 2007 for 620 pounds. '[M]y book . . . which was completed in 1948, had been declined by the Cambridge University Press. Who the referee was, I don't know, but it could have been Jeffreys, since Frank Smithies told me he saw the manuscript on Jeffreys' desk. I was discouraged and did nothing about the manuscript for several months at least. Then Donald Michie, a good friend of mine right from the Newmanry days, said 'Why don't you send it in somewhere and let someone else do the work if you're not working on it?' I said 'Look, the manuscript's in Manchester and I'm in London.' He replied 'Take a train to Manchester and come back the same day on another train.' I didn't have enough faith in myself without his moral support, and I did what he advised and submitted the manuscript to Charles Griffin, who published it in 1950. (Most publication was slow at the time.) I think it wasn't such a bad little book. Somebody phoned me recently and called it a classic. (Perhaps judgments should be made by oracles. Marc Kac's naughty philosophy of refereeing was to accept everything and 'let history decide.') . . . I knew Fisher, but not well, and generally was on pretty good terms with him. He once told me that the best thing he could do for genetics was to teach it to mathematicians. He also said that he found my 1950 book interesting' (David L. Banks, 'A Conversation with I. J. Good', Statistical Science, 1996, Vol. 11, No. 1, 1-19). Good put a 'good-natured' CV on his Virginia Tech Web page, where he writes, 'Foreign Office, 1941-45. Worked at Bletchley Park on Ultra (both the Enigma and a Teleprinter encrypting machine the Schlüsselzusatz SZ40 and 42 which we called Tunny or Fish) as the main statistician under A. M. Turing, F. R. S., C. H. O. D. Alexander (British Chess Champion twice), and M. H. A. Newman, F. R. S., in turn. (All three were friendly bosses.)' Reviewed by Jimmie Savage for Journal of the American Statistical Association, Vol. 46, No. 255 (Sept., 1951), pp. 383-384, and by P. A. M. for Journal of the Royal Statistical Society. Series A (General), Vol. 113, No. 2 (1950), p. 250. 'Bayes Factor appears in I. J. Good's 1958 'Significance Tests in Parallel and in Series,' Journal of the American Statistical Association, 53, 799-813. Previously in his Probability and the Weighing of Evidence (1950) Good had used the term 'factor' explaining that 'Dr. A. M. Turing suggested in a conversation in 1940 that the word 'factor' should be regarded as a technical term . . . and that it could be more fully described as the factor in favour of the hypothesis H in virtue of the result of the experiment.' Jeffreys had introduced this factor, denoting it by K but not giving it a name (Theory of Probability (1939, chapter V.)' (Earliest Known Uses of Some of the Words of Mathematics (B)' Web page on AOL). Good has been called the 'Overlooked Father of Computation' (Hook & Norman, Origins of Cyberspace 635, which is Good's 'Speculations Concerning the First Ultraintelligent Machine', in Alt & Rubinoff, eds., Advances in Computers, vol. 6, pp. 31-88, 1965). 'Arthur C. Clarke used Good's name in 1968, along with that of Marvin Minsky, to explain the thinking capabilities of HAL 9000' (OOS). Buchnummer des Verkäufers 17125

Titel: Probability and the Weighing of Evidence.