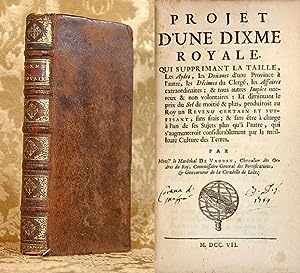 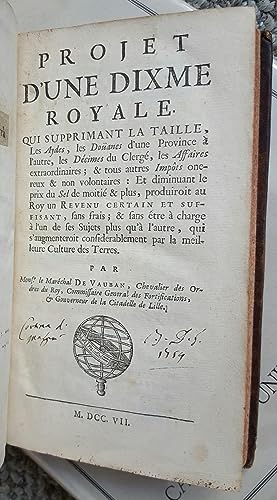 xii, 268 pp; 4 folding tables. Contemporary leather. Very Good. Second edition. The first edition, published in January, 1707, was suppressed by order of parliament. 'Vauban's Projet d'une dixme royale ('Project for a Royal Tythe, or General Tax') caused a stir in 1707. It did not appear under his own name, for Vauban was well aware of the controversy it would bring. In it, he asserted that France's complicated tax code should be abandoned and a flat tax of ten percent on property and trade be put in place. More significantly, in this book Vauban supported his arguments with a wealth of statistical data he had collected, and thus laid the foundation for the use of statistics to corroborate and forecast economic aims. Louis XIV censored its publication, however, and this devastated Vauban, though it appears they remained friends' (answers[dot]com/topic/vauban). 'This is one of the outstanding performances in the field of public finance, unsurpassed, before or after, in the neatness and cogency of the argument. . Vauban rose fully to those heights, trodden by so few, from which fiscal policy is seen to be a tool of economic therapeutics, the ultimate result of a comprehensive survey of the economic process. With Gladstonian vision he realized that fiscal measures affect the economic organism right to its cells and that the method of raising a given amount of revenue may make all the difference between paralysis and prosperity. Second, he based his conclusions in every detail on numerical fact. His engineer's mind did not guess. It figured out. Purposeful marshalling of all the available data was the essence of his analysis. Nobody ever understood better the true relation between facts and argument. It is this that makes him an economic classic in the eulogistic sense of the word, and a forerunner of modern tendencies' (Joseph A. Schumpeter, History of Economic Analysis, pp. 197-8). Buchnummer des Verkäufers 19035