Verwandte Artikel zu Quakerism Not Christianity: or, Reasons for Renouncing...

Home Cox, Samuel Hanson Quakerism Not Christianity: or, Reasons for Renouncing the ... 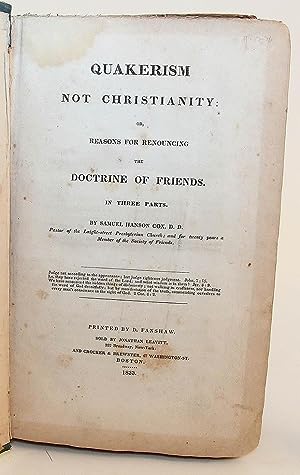 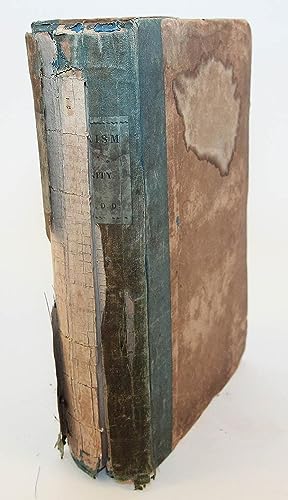 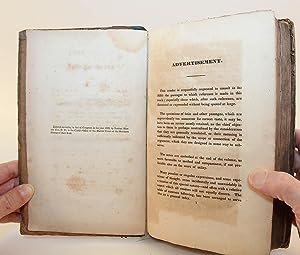 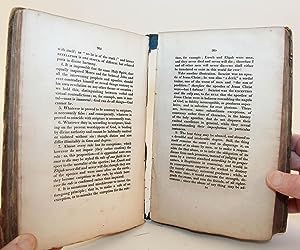 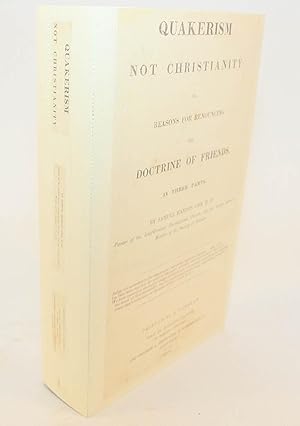 Quakerism Not Christianity: or, Reasons for Renouncing the Doctrine of Friends. In Three Parts

B000J314UI 1833 first edition Daniel Fanshaw (NY) 6 1/8 x 9 1/2 inches tall x 2 inches thick hardbound, publisher's paper-covered boards over green cloth spine, 686 pp. Book is preserved in a custom-made Brodart rare book box, made from archival-quality, acid-free, lignin-free, 20-point light tan folder stock with a 3% calcium carbonate buffer, securely held in place by Velcro buttons, with title page reproduced on front cover of box and title on the spine of the box. Covers rubbed, bumped, edgeworn and chipped, cloth spine cover has worn away and the book is beginning to split in two or three places along the spine. Lacking front free-endpaper, but an otherwise complete copy. Mild foxing and a few light stains to front and rear prelims, with occasional foxing otherwise. Altogether, an excellent candidate for rebinding or for use as a reading copy. ~MMM~ Samuel Hanson Cox (1793-1880) was an American Presbyterian minister and a leading abolitionist. Cox was born in Rahway, New Jersey, of Quaker stock. After renouncing his religion and serving in the War of 1812, he studied law before entering the ministry. He was pastor of the Presbyterian church at Mendham, New Jersey from 1817 to 1821. He then moved to New York City where he was pastor of two churches from 1821 to 1834. Cox helped found the University of the City of New York, now New York University, in 1832, teaching classes in theology and contributing the college's motto. Due to his anti-slavery sentiments, he was mobbed, and his house and Laight Street church were sacked in the Anti-abolitionist riots (1834). He then move out of the city, and from 1834 to 1837 was professor of pastoral theology at Auburn. In a 1977 article in the Journal of Presbyterian History, Cox was described as an 'anti-Catholic, anti-Anglican, anti-Congregational ecumenist.' This work, 'Quakerism Not Christianity," generated at least one work in reply, the following year, by David Meredeith Reese, 'Quakerism Versus Calvinism: Being a Reply to Quakerism Not Christianity' (NY: William A. Mercein). It was printed by New York printer Daniel Fanshaw (1788-1860), referred to in an 1885 history of the trade as 'the greatest printer of his time.' During the War of 1812, Fanshaw served in the New York Militia at Harlem Heights alongside 1600 other volunteers sent to defend the city against British invaders expected to attack through Long Island Sound. He became the first printer for the American Bible Society and continued in that position for thirty years. His skill in combining three separate technologies - the stereotype printing process, the composition inking rollers process and the Treadwell steam power press - revolutionized the printing industry. Buchnummer des Verkäufers MMM-0341-445

Titel: Quakerism Not Christianity: or, Reasons for ...