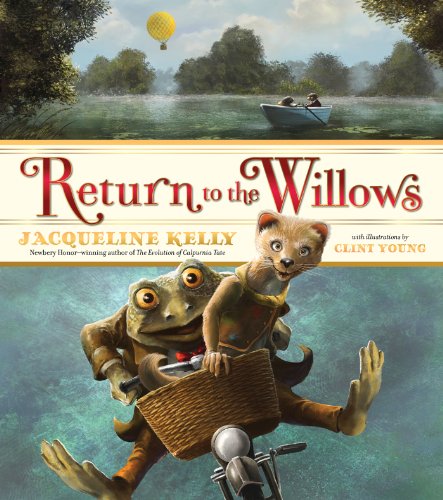 RETURN TO THE WILLOWS.

States First Edition and has full number line beginning with "l". Signed only by the author and illustrator on the title page. No other names or writing. Hardcover. Dust jacket and book are in Fine, as new, condition. The Mole, Ratty, Toad, and Badger are back from Kenneth Grahame's classic THE WIND IN THE WILLOWS. 281 pages. ; 7 1/2 in. x 8 1/2 in. Bestandsnummer des Verkäufers 500573

Titel: RETURN TO THE WILLOWS.

"Evoking the ineffable mixture of capers and camaraderie that has kept the original in print for so long, she serves up a roistering, boisterous tale of hot-air balloons, fireworks and GBQs*. And while youngsters are lapping up Toad's adventures, howling as he rockets from lugubrious to lovable in the space of a chapter, adults lucky enough to read this aloud will also have lots of sly asides to chuckle over...." --The Washington Post

"Engaging from beginning to end, this sequel is superb." --School Library Journal

"...an affectionate follow-up to a classic of children's literature, one that succeeds on its own as a humorous and adventurous romp along the riverbank and into the Wild Wood." --Publishers Weekly

"Writing a sequel to such a beloved classic is almost as bold a move as Toad stealing a motor-car, but happily, Kelly's results warrant accolades rather than a trip to gaol." --Kirkus

"The Evolution of Calpurnia Tate is the most delightful historical novel for tweens in many, many years. . . . Callie's struggles to find a place in the world where she'll be encouraged in the gawky joys of intellectual curiosity are fresh, funny, and poignant today." --The New Yorker

"Each chapter of this winning . . . novel opens with a quotation from On the Origin of Species--a forbidden book that her own grandfather turns out to have hidden away. Together they study Darwin's masterpiece, leading to a revolution in Callie's ideas of what she might accomplish on her own." --The New York Times Book Review on The Evolution of Calpurnia Tate

"Callie's transformation into an adult and her unexpected bravery make for an exciting and enjoyable read. Kelly's rich images and setting, believable relationships and a touch of magic take this story far." --Publishers Weekly, starred review

"Interwoven with the scientific theme are threads of daily life in a large family--the bonds with siblings, the conversations overheard, the unspoken understandings and misunderstandings--all told with wry humor and a sharp eye for details that bring the characters and the setting to life. The eye-catching jacket art, which silhouettes Callie and images from nature against a yellow background, is true to the period and the story. Many readers will hope for a sequel to this engaging, satisfying first novel." --Booklist, starred review on The Evolution of Calpurnia Tate

"Narrator Calpurnia's voice is fresh and convincing, and Granddaddy is that favorite relative most readers would love to claim as their own. Historical fiction fans are in for a treat." --BCCB on The Evolution of Calpurnia Tate