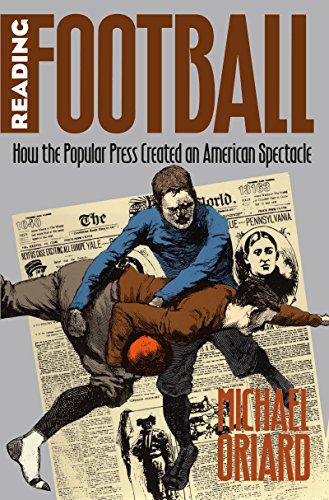 Language: English. Brand new Book. Is football an athletic contest or a social event? Is it a game of skill, a test of manhood, or merely an organized brawl? Michael Oriard, a former professional player, asks these and other intriguing questions in Reading Football , the first contemporary book about football's formative years. American football began in the 1870s as a game to be played, not watched. Within a brief ten years, it had become a great public spectacle with an immense following, a phenomenon caused primarily by the voluminous commentary about the game conducted in popular newspapers and magazines. Oriard shows how this constant narrative in football's early years developed many different stories about what the game meant : football as pastime, as the sport of gentlemen, as a science, as a game of rules and their infringements. He shows how football became a series of cultural stories about power, luck, strategy, and deception. These different interpretations have been magnified by football's current omnipresence on television. According to Oriard, televised football now plays a cultural role of enormous importance for men, yet within the field of cultural studies the influence of football has been ignored until now. From the book: "A receiver sprints down the sideline, fast and graceful, then breaks toward the middle of the field where a safety waits for him. From forty yards upfield the quarterback releases the ball; it spirals in an elegant arc toward the goalposts as the receiver now for the first time looks back to pick up its flight. The pass is a little high; the receiver leaps, stretches, grasps the ball--barely, fingers clutching--at the very moment that the safety drives a helmet into his unprotected ribs. The force of the collision flings the receiver backward, slamming him to the turf. . . . This familiar tableau, this exemplary moment in a football game, epitomizes the appeal of the sport: the dramatic confrontation of artistry with violence, both equally necessary." |The first contemporary book about football's formative years. Oriard, a former professional football player, examines how American football changed from a game to be played to a game to be watched. Buchnummer des Verkäufers TNP9780807847510