Home Recusant History: The Journal of the Catholic Record Society - ... 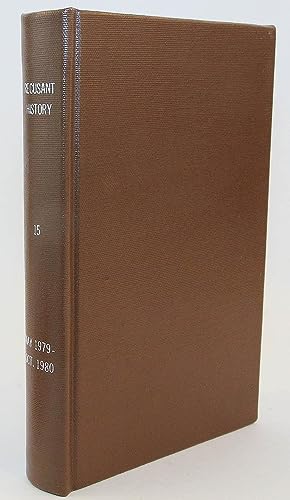 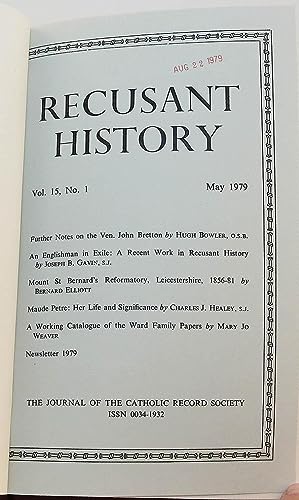 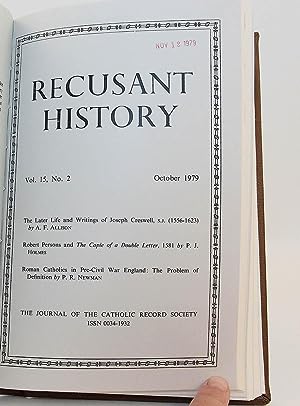 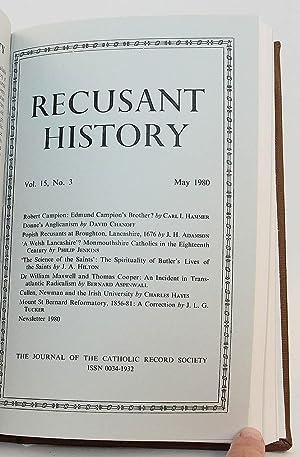 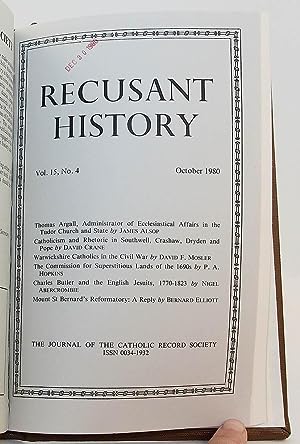 B00MCXTPTA 1980 first edition Catholic Record Society (Sutton Coldfield, England), printed at the Catholic Records Press, Exeter, England, 6 1/4 x 9 1/4 inches tall brown buckram hardbound, white lettering to spine, each issue in grey wraps, 304 pp. Red Mt. St. Alphonsus Seminary (Esopus, NY) date stamp to a page on at least two of the four issues. Card pocket at rear of bound volume. Otherwise, a near fine volume, with contents clean, bright and unmarked. Note that this is a heavy and oversized book, so additional postage will be required for international or priority orders. ~O~ Four bound, consecutively numbered quarterly issues, which constitute Volume 15 of the journal Recusant History, issued May 1979 through October 1980 by the Catholic Record Society, a journal of research in Reformation and Post-Reformation Catholic history in the British Isles. Articles in this set of issues include: [No. 1] Further Notes on the Ven. John Bretton; An Englishman in Exile: A Recent Work In Recusant History; Mount St. Bernard's Reformatory, Leicestershire, 1856-81; Maude Petre: Her Life and Significance; A Working Catalogue of the Ward Family Papers; [2] The Later Life and Writings of Joseph Creswell, S.J. (1556-1623); Robert Persons and The Copie of a Double Letter, 1581; Roman Catholics in Pre-Civil War England: The Problem of Definition; [3] Robert Campion: Edmund Campion's Brother?; Donne's Anglicanism; Popish Recusants at Broughton, Lancashire, 1676; 'A Welsh Lancashire'? Monmouthshire Catholics in the Eighteenth Century; 'The Science of the Saints': The Spirituality of Butler's Lives of the Saints; Dr. William Maxwell and Thomas Cooper: An Incident in Trans-atlatic Radicalism; Cullen, Newman and the Irish University; Mount St. Bernard Reformatory, 1856-81: A Correction; [4] Thomas Argall, Administrator of Ecclesiastical Affairs in the Tudor Church and State; Catholicism and Rhetoric in Southwell, Crashaw, Dryden and Pope; Warwickshire Catholics in the Civil War; The Commission for Superstitous Lands of the 1690s; Charles Butler and the English Jesuits, 1770-1823; Mount St Bernard's Reformatory: A Reply. In the history of England and Wales, recusancy was the state of those who refused to attend Anglican services; these individuals were known as recusants. The term, which derives ultimately from the Latin recusare (to refuse or make an objection) was first used to refer to those who remained loyal to the Roman Catholic Church and did not attend Church of England services, with a 1593 statute determining the penalties against 'Popish recusants.' The 'Recusancy Acts' began during the reign of Elizabeth I and were repealed in 1650. They imposed various types of punishment on those who did not participate in Anglican religious activity, such as fines, property confiscation, and imprisonment. Despite their repeal, restrictions against Roman Catholics were still in place until full Catholic Emancipation in 1829. In some cases those adhering to Catholicism faced capital punishment, and a number of English and Welsh Catholics executed in the 16th and 17th centuries have been canonised by the Catholic Church as Christian martyrs. Buchnummer des Verkäufers O-0841-1216

Titel: Recusant History: The Journal of the ...