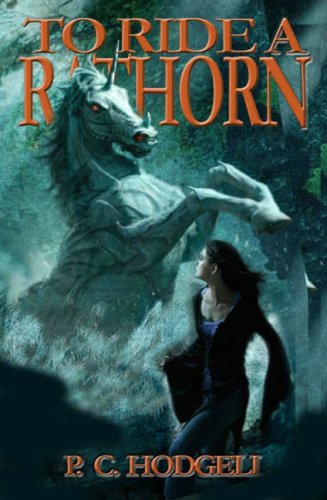 Signed by Author 1592221025 Front of dust jacket has numerous squiggly scratches on it and one longer scratch. Otherwise a new, unread copy. Price intact. Not a bookclub. Bestandsnummer des Verkäufers 018373

Titel: To Ride A Rathorn

To Ride a Rathorn the fourth book of the Kencyrath, P. C. Hodgell,'s latest high fantasy novel, is the sequel to Seeker's Mask (3rd), which in turn follows God Stalk (1st) and Dark of the Moon (2nd) collected in the Meisha Merlin omnibus, Dark of the Gods. These are the chronicles of Jamethiel Priest's-bane, otherwise known as Jame, as she struggles to find a place in a universe full of danger, intrigue, and more than a bit of downright lunacy. The current novel's title To Ride a Rathorn, comes from the Kencyr phrase that refers to someone attempting something insane, but it is too dangerous for them to stop. The reference is also to a certain young rathorn (think of an armor-plated, carnivorous unicorn with a nasty temper) who is after Jame for killing his mother and about to catch up with her. At Tentir, Jame faces cut-throat competition and finds even more buried, poisonous family secrets. Not only is the Caineron heir sent to humiliate her but a charming Ardeth Highborn arrives hell-bent on seducing her. Then too, what is she to make of the mysterious White Lady who haunts her dreams or of the growling monster and prowls Tentir's hallways and is said to eat young cadets for breakfast? For she is learning Tentir has secrets of its own. And it is fighting for its soul. Under political pressure that threatens to compromise its independence, it looks to its Commandant, an honorable man; but also a Caineron. As the college tests Jame, so she tests it. "Some things need to be broken."