Verwandte Artikel zu Rising in the West: The True Story of an "Okie"...

Home Morgan, Dan Rising in the West: The True Story of an "Okie" Family from the ...
Beispielbild für diese ISBN 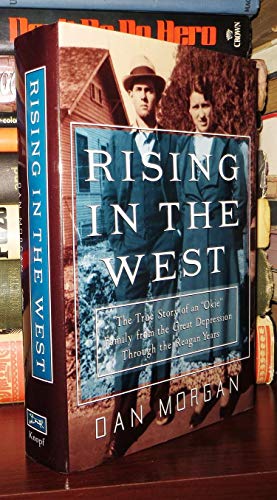 Rising in the West: The True Story of an "Okie" Family from the Great Depression through the Reagan Years

Like the Joads of Steinbeck's unforgettable The Grapes of Wrath, Oca Tatham and his family trekked west with the millions of Americans who fled the Great Depression in search of jobs and hope in California. Rising in the West presents the magnificent story of what became of this family, and opens a fascinating, heretofore almost unchronicled chapter of American experience.
Drawing on years of intensive historical research, as well as countless interviews with family, friends, and associates, Dan Morgan gives us the Tathams' remarkable lives in absorbing detail. In less than half a century, they went from migrant fruit-picking to middle-class prosperity in the promised land of California, where they got caught up in the quintessential realities of the Sun Belt: agribusiness, irrigation projects, the defense industry, real-estate development, nursing home chains, and football franchises. But like so many white Southerners who went west coming from nothing, the Tathams remained outsiders. As individualistic Christians ever wary of mainstream American life and skeptical of mainstream notions of success, they found their place in that cohesive Sun Belt culture whose religious, ethical, and political outlook would form the basis of the New Populism that manifested itself so dramatically in the Reagan Revolution.
More than anything else, fundamentalist Pentecostalism is at the heart of the Tathams' experience. The brush arbors and storefront churches of Oca's youth are linked by generations of deep religious commitment to the huge revivalist tabernacles that dot southern California. While the family has always been bound together by the fervor of their faith, Morgan shows how that faith is being tested today, not only as the Tathams confront inevitable family adversities like alcoholism, terminal illness, and troubled marriages, but also as they, and others like them, take their stand on the deeply divisive issues - including abortion and school prayer - topping the national agenda, and leave their profound stamp on American politics.
Rising in the West is an extraordinary achievement - an engrossing account of the growth of America, as well as the intensely personal drama of a family struggling to keep faith with itself.