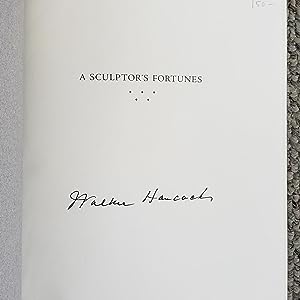 vii, 1, 277 pp; illus. Original cloth, large 8vo. Near Fine, in near fine dust jacket. SIGNED by Hancock on verso of frontispiece. Hancock was 'a sculptor known for his monumental war memorials, celebratory depictions of Presidents and works with religious themes . . . In a career that nearly spanned the century, Mr. Hancock produced hundreds of realistic works, ranging from a 39-foot bronze angel in the 30th Street Station in Philadelphia, which honors railroad employees killed in action in World War II, to a bust of former President George Bush in the Capitol, to a monumental statue of James Madison in the Library of Congress, to a Christ figure in the central altar in the National Cathedral in Washington' (New York Times, Obituary, Jan. 2, 1999). 'At a Trappist monastery in Kentucky, he created an extraordinary sculpture group, The Garden of Gethsemani (1965 66). On one side of a forest glade, a kneeling figure of Christ, seen from behind, agonizes about offering himself up for sacrifice, while on the other side his disciples, Peter, James, John, lie asleep. This is a memorial to Jonathan Daniels, an Episcopal seminarian murdered during the Civil Rights Movement. A duplicate of the 2-part work is at Trinity Episcopal Church, Topsfield, Massachusetts, and a duplicate of Christ Praying is at the Episcopal Divinity School, Cambridge, Massachusetts' (Wikipedia). Hancock was awarded the National Medal of Arts in 1989, and the Medal of Freedom in 1990. As the book was published just a year before Hancock's death, signed copies are not likely to be common. Initially, I thought the signature might be printed, but I no longer think so because Hancock's signature is reproduced on the back of the dust jacket, but it is not 100% identical to the one in the book (it's virtually identical). Presumably, were it also stamped in the book, the exact same example of the signature as on the jacket would have been used. Buchnummer des Verkäufers 21742