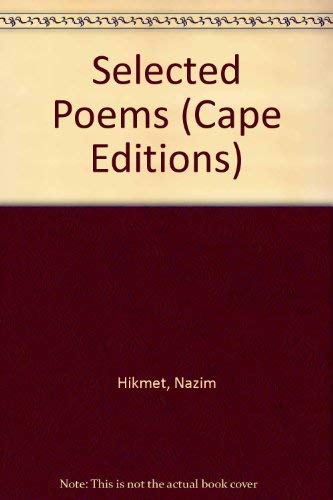 Buchbeschreibung Jonathan Cape (Imprint: Cape Editions), 30 Bedford Square, London, 1970. Original Wraps. Zustand: Near Fine. Zustand des Schutzumschlags: Near Fine. Reprint of the First Edition in English. Cape Editions No. 10. Translated from the Turkish by Taner Baybars. ***First reprint of the simultaneous first paperback edition in English. A hardback edition was also published at the same time, but these mostly went to libraries. ***Near fine in thin white card inner wrappers with silver-grey titles to spine and front inner wrapper. Neat contemporaneous owner's name, place and date: 'H. C. Sutcliffe London 1972' in black fountain pen ink to top of front free endpaper. Spine tight. ***In a near fine blue-green paper dustwrapper with black and white titles to spine and front panel. Dustwrapper has not been price-clipped, showing original publisher's price of 8s / 40p net (and simultaneous hardback price of 18s / 90p net). No tears. Spine and rear and front panels of dustwrapper bright. 178mm x 110mm. 93 pages including bibliography and a note about the author to the rear. ***'It has been said that Nazim Hikmet is modern Turkish poetry; he is more than that - he is a poet of international stature. Born in Salonika - then a Turkish province - in 1902 and educated in a naval school on the Sea of Marmara, he left Turkey for Moscow University in 1921 and stayed there for three years. On his return to Turkey, his political allegiances brought him a number of terms in prison until, in 1938, he was finally condemned, virtually for life. He was freed in a general amnesty in 1951 and escaped to the Soviet Union where he died in 1963. ***Hikmet brought free verse to Turkish poetry, completely revolutionizing its technical complexion. His range is remarkable: from the extreme and moving simplicity of the love lyrics to the deep involvement in facts and their interpretation, in politics and world affairs. Though his work is well-known on the Continent, this is Hikmet's first appearance in English.' (Quote from inside front of wrapper blurb). ***First reprint of the first simultaneous wrappers edition, complete in its original fragile outer dustwrapper. Of interest to collectors of Cape Edition first edition titles. ***For all our books, postage is charged at cost, allowing for packaging: any shipping rates indicated on ABE are an average only: we will reduce the P & P charge where appropriate - please contact us for postal rates for heavier books and sets etc. Bestandsnummer des Verkäufers 4818