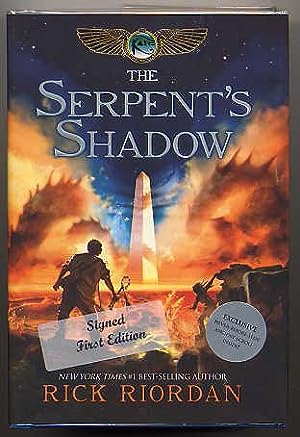 THE SERPENT'S SHADOW. BOOK THREE OF THE HEROES OF OLYMPUS.

Titel: THE SERPENT'S SHADOW. BOOK THREE OF THE ...

3Q 4P M The third book in the Kane Chronicles series, The Serpent's Shadow opens with a sense of intrigue. An unnamed narrator claims to be transcribing audio recordings left behind by siblings, Carter and Sadie Cane. A mysterious introduction draws readers in right away-the narrator claims, "The tape arrived at my home in a charred box perforated with claw and teeth marks that my local zoologist could not identify." What adventure-loving teen could fail to be drawn in with such a start? As the story progresses, the siblings continue their study of ancient Egyptian writings and spells, both of which frequently come in handy as they fight against the wrath of evil gods and solicit the help of a few friendly ones. The fast pace and time travel will appeal to readers who like adventure reads. Not only does Riordan keep the plot moving along through 400 pages, he does a good job of balancing the story for new readers and fans of the series. There is enough backstory to keep first-time Riordan readers informed, but not so much that this tale gets bogged down. A solid adventure read, The Serpent's Shadow will have additional appeal to teens who are interested in Egyptian mythology.-Anna Foote. VOYA"

Riordan's Kane Chronicles trilogy concludes with a smash, as Carter and Sadie Kane once again try to save the world from the forces of Chaos. The giant Chaos snake Apophis and his rebel magician allies are on the rise. Luckily, Carter and Sadie Kane are back, ready to fight Apophis and restore Ma'at, the order of the universe. The ghost of an ancient psychotic magician offers help: Find the shadow of Apophis, capture it and use it for an execration spell that will pop the evil god so far into the Duat-the magical realm that coexists with our world-that he will never return. As in the previous volumes-The Red Pyramid (2010) and The Throne of Fire (2011)-the tale is told in the alternating and still-fresh voices of Sadie and Carter. Beyond the explosive action and fireworks, Riordan deftly develops the theme of the duality of the universe-order versus chaos, living a normal life versus risking the extraordinary, being protected by parents versus growing up and stepping out of their shadows. A rousing adventure with plenty of magic and food for thought. Other gods and future stories are hinted at in the conclusion; in the meantime, Riordan's The Kane Chronicles Survival Guide is available to maintain the spell. (glossary, list of gods and goddesses) (Fantasy. 10-14) Kirkus"

Joined by the Egyptian gods who helped them in previous books (The Red Pyramid, rev. 7/10; The Throne of Fire, rev. 9/11) as well as their fellow teen magicians Zia and Walt, Sadie and Carter Kane face the culmination of peril in this third volume in the Kane Chronicles. Apophis, the Serpent of Chaos, is attempting to achieve his legendary goal of swallowing the Sun God, Ra, and destroying all creation. If Sadie and Carter can collect the knowledge and tools they need from journeys to ancient sites in Egypt and the Duat, the Egyptian underworld, they might be able to perform a spell of banishment on him-but they could just as easily burn themselves out in a spell of such power. As they solve puzzles and fight demons, the siblings grow in confidence and ability. Their wry asides and comedic takes on their predicament keep them accessible to their adventure-loving audience, many of whom will enjoy the romantic byplay between Carter and Zia and between Sadie and Walt. Although little is new in this iteration of Riordan's universe, the climax soundly delivers, and the denouement hints at possible future overlap with foreign gods. Paging Percy Jackson? -anita l. burkam Horn Book"