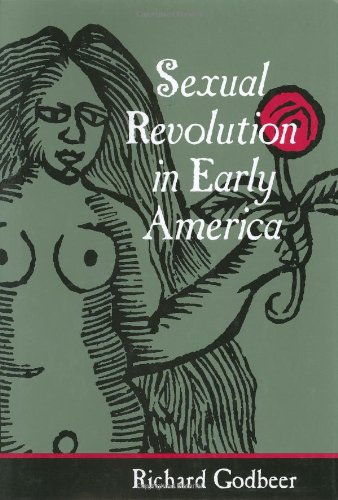 According to this meticulously researched study, the Puritan roots of America's sexual mores are deep and surprisingly complex... Godbeer utilizes an impressive array of sources, from private writings, print, and ephemeral materials to court depositions, didactic literature, and official documents for his original research. The result is a valuable contribution to American social history.

Colonial history will never quite be the same. Sexual Revolution in Early America is the most thorough compendium of sexual incidents, attitudes, laws, and literature in British America before 1800.... This work will be the central reference point for our understanding of sexuality in early America for many years to come. The book has much to offer both the casual and the thoughtful reader.

Godbeer offers a fresh view of the 'moral and cultural architecture' of early America and the American Revolution through his analysis of sexual mores and behavior... Godbeer's readings are important to readings of early American captivity narratives... [and] has clear implications for feminist literary scholars and queer theorists who focus on questions of agency and transgression.

Important... Godbeer pays meticulous attention to the details of cultural meaning and practice... The book's regional and chronological range is impressive... and the author's facility with such a wide variety of sources touching on typically private and thus seemingly inaccessible matters might serve as a model for scholars.

Richard Godbeer challenges our traditional stereotypes of colonial America by recovering a remarkable volume of sexual discussion and debate, prosecution and evasion... In both their sexual excesses and anxieties, Godbeer's colonists seem surprisingly modern and accessible.

Richard Godbeer's book on sexuality in colonial British America has been eagerly awaited by those of us who had heard or read parts of this project in conference papers or articles. Those presentations had been filled with fresh insight and careful research. His full study has lived up to its promise. His careful, nuanced study is by far the best discussion of colonial sexuality available to scholars. While not slighting discussions of theory, Godbeer has avoided opaque jargon and balanced the theory with vignettes that bring the period and its people to life.

The first comprehensive history of sexuality in early America. It is based on daunting archival scholarship, particularly in legal records, and attention to the details of social life, but is written with such verve and humanity that many of the personages the author considers here come alive off the page. Many of the sexual dramas Godbeer relates will seem familiar to the modern reader: adulterous lovers, the sexual experimentation of youth, the shame of vice revealed for all to see. But early American society was far more densely leavened with the yeast of Puritanism and moral surveillance than America of the 21st century, so that the contrasts with contemporary sexuality emerge in striking fashion.

(Robert A. Nye Journal of the American Medical Association)

An astute, wide-ranging analysis... This is an excellent piece of scholarship. Based on extensive research in all sorts of printed sources and private documents, and covering much of the territory of British North America, it will likely remain the most detailed treatment of the subject for years to come.

Readers under the misapprehension that the sexual revolution was one of the many new movements that changed the US in the 1960s should run to the nearest bookstore and buy a copy of Godbeer's Sexual Revolution in Early America. Taking his cue from the numerous historians who have researched and written on the new social history of early America, Godbeer mined innumerable primary and secondary sources to create an accurate portrayal of sex in Colonial America... An excellent narrative of life in early America.

A small, general, select stock with an emphasis on art, architecture, photography, military history, books on books, and travel journals. Other topics may also become available.


Payment through Abebooks using VISA or MasterCard. We accept cash, check or money order. Shipment is via 4th class book rate @ $5.00 for the first
book & $1.50 for each additional book. Priority, UPS &
overseas shipment are extra.