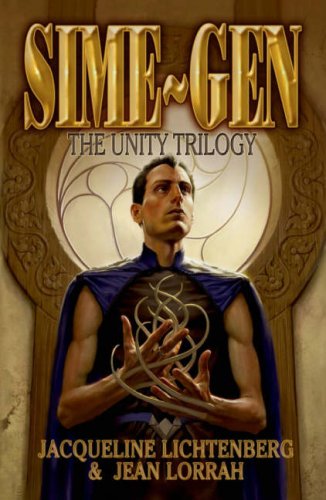 Signed by Author 1592220029 Price intact. No remainder mark. Depression on spine of dust jacket, else book and jacket are like new. Flatsigned by both authors on the main title page. Dust jacket in a Brodart protector. Contains three novels: House of Zeor, Ambrov Keon, and Zelrod's Doom. Bestandsnummer des Verkäufers 020329

The saga of humanity's destiny... Following a cataclysm, humanity has been divided into two mutant forms: the Simes and the Gens. Gens consider themselves to be the true humans, with little outward change, but their bodies produce selyn, an energy that Simes can't live without. The stronger and faster Simes develop the means to extract selyn from the Gens, a method that kills the Gen in the process. Gen communities are raided by Simes, the Gens rounded up and held in pens for Simes to use when needed. This is the saga of how these two disparate peoples learn to live as one. Sime~Gen: The Unity Trilogy presents three classic novels of the future struggle of humanity: In House of Zeor by Jacqueline Lichtenberg, Hugh Valleroy, a Gen, must rescue the woman he loves from Sime raiders. To do so, he must learn to cooperate with and trust a renegade Sime, leader of the infamous House of Zeor. In Ambrov Keon by Jean Lorrah, Risa Tigue, having just witnessed her father's death in a hurricane, stumbles upon a Gen man who saves her life and discovers that she is much more than what she seems. Can she admit the truth of this discovery? In Zelerod's Doom by Lichtenberg and Lorrah, Gen numbers are dwindling, which spells the end of Simes as well. As Gens rise up to fight back against the tyranny of the Simes, the two must find a way to live together or both will be destroyed. Sime~Gen: The Unity Trilogy kicks off a massive six-book series, featuring the reprints of all eight classic Sime~Gen novels as well as brand new novels and short stories. The Unity Trilogy will be followed in July of 2004 with the first new Sime~Gen novel in over 20 years, To Kiss or to Kill by Jean Lorrah! The Unity Trilogy will be available in both hard cover and soft cover. The hard covers will be shipped with a beautiful bookplate designed by Sime~Gen art director Patric Michael and autographed by Jean and Jacqueline!