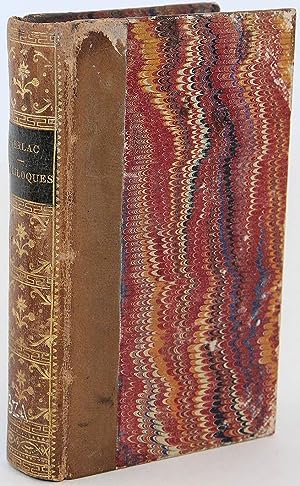 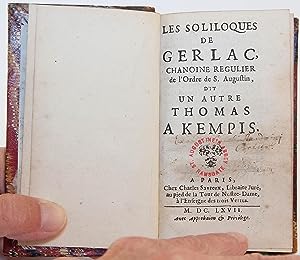 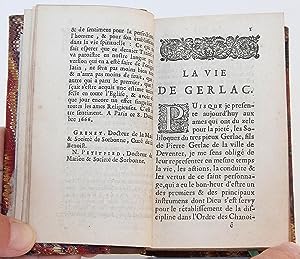 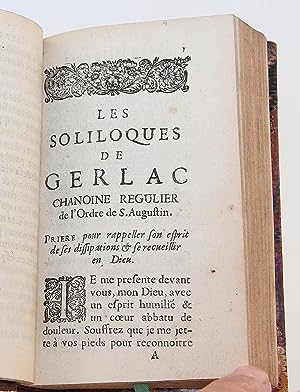 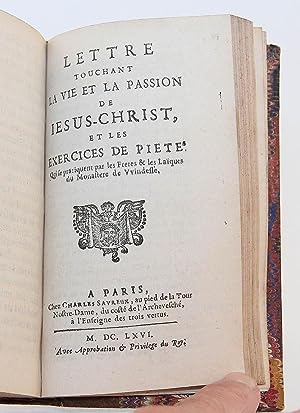 B00L4N42LU In French. 1667 first edition thus Chez Charles Savreux (Paris), 3 1/8 x 5 1/8 inches tall hardbound, marbled paper-covered boards over leather spine, elaborate gilt tooling and gilt-lettered black leather label to spine, marbled endpapers, sewn-in silk bookmark, [14], 87, [1], 338, [6] pp., complete (including blank front and rear endpapers). Covers only slightly rubbed and edgeworn, particularly at top of spine, but the binding is quite solid. Formerly in the collection of St. Augustine's Abbey, Ramsgate, East Kent, England (a Benedictine monastery whose remaining community moved in 2010 to an allied house in Surrey), with its white identifying marks to the lower spine, bookplate to front pastedown and red-and-black stamp to title page. The title page is lightly soiled, with a prior inscription partly erased. An occasional very slight instance of foxing, but overall a very good copy indeed - clean, bright and unmarked - of an exceptionally rare first French translation of 'The Soliloquies of Gerlac Peterson,' together with 'The Life of Gerlac' (probably translated from the Latin Chronicles of Windesheim) and a 12-page foreword. Neither OCLC nor Copac list any copies worldwide. Only the BnF catalog (Bibliotheque Nationale de France) locates locates a copy, at the BnF Tolbiac Rez-de-Jardin Rare Book Room in Paris. This work, 'Soliloquium cum Deo Ignitum,' was first printed in Latin in Cologne in 1616, in Flemish in 1623, in Italian in 1674 and in Spanish in 1686. This is the first French translation. ~KM2~ Gerlac Peterson (also sometimes spelled Petersz, Peterssen or Petersen; in Latin, Gerlacus Petri; 1377 or 1378-1411) was a Dutch mystic who was for most of his life a member of the Brethren of Common Life, where he devoted his time (with his brothers) to calligraphy, transcription of manuscripts, education and prayer. As a member of this order, he was associated with many illustrious contemplatives, including John of Ruysbroeck, Florence Radewyns, Henry of Kalkar, Gerard of Zutphen, John a Kempis and, perhaps most significantly from a modern view, with John's brother, Thomas a Kempis, now best known as the author of the devotional classic 'The Imitation of Christ.' Gerlac has been called 'another Kempis,' and indeed this is part of the title of this translation of Gerlac's 'Soliloquies.' A number of critics have ascribed to Kempis words or theories which belong to Gerlac. Gerlac left his brethren to come back to his cell, where, as he said, 'somebody was waiting for him.' It has been maintained that the 'Imitation' reproduced several ideas and the general spirit of Gerlac's ascetic works. In fact, Thomas a Kempis inserted into a copy of the 'Imitation' which he wrote in his own hand in 1441, a passage from Gerlac's 'Soliloquies' in which Gerlac says he would feel no pain, if necessary for the greater glory of God, to be in hell forever. This passage is an interpolation, which was deleted from subsequent copies of the 'Imitation' (produced at a time just prior to the invention of modern printing). It has been said that the difference between the ascetic theories of Gerlac and those of the author of the 'Imitation' are numerous and deep enough to make any similarities apparent. Buchnummer des Verkäufers KM2-0641-877