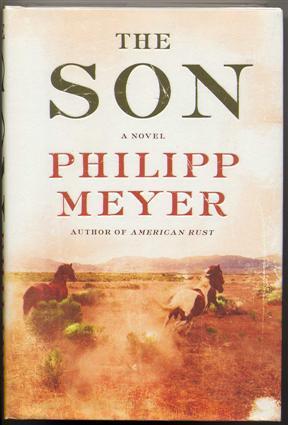 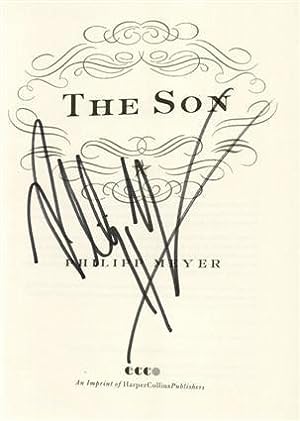 First Edition, First Printing as indicated by the statement "First Edition" on the copyright page and the full number line (10 9 8 7 6 5 4 3 2 1 ) , and signed by the author on the title page - signed only - no other names writing or marks. This book and dust jacket is in Fine, as new, condition. The epic story of a Texas family (the McCulloughs) whose 13 year old son, Eli, was taken captive by Comanche Indians in 1849. A powerful novel that maps the violence in Texas and America in the mid 1800s. 561 pages. ; Standard Book Size. Bestandsnummer des Verkäufers 124911

"With its vast scope, The Son makes a viable claim to be a Great American Novel of the sort John Dos Passos and Frank Norris once produced... an extraordinary orchestration of American history.--Washington Post

"There is an extravagant quantity of birth, death and bitter passion in Philipp Meyer's grand and engrossing Texas saga."--Wall Street Journal

"Philipp Meyer offers a tale that spans generations and, in its own way, encapsulates the history of the state itself."--Los Angeles Times

"As bold, ambitious and brutal as its subject: the rise of Texas as seen through the tortured history of one family. At 561 pages, The Son is a demanding read... But by the end, Meyer ties it together and not too neatly. Tougher-than-tough Eli McCullough would respect that."--USA Today (4 Stars)

"One of the most solid, unsparing pieces of American historical fiction to come out this century... a brilliant chronicle of Texas... stunning, raw and epic... The Son is vast, brave and, finally, unstoppable."--NPR

"This is the book you want to read this summer... Every facet of Meyer's world--scent and sight and sensation--has weight and heft... Meyer's dream is a nightmare in which blood seeks power. It's also un-put-down-able."--Esquire

"A novel that is an epic in the truest sense of the word: massive in scope, replete with transformations in fortune and fate, and drenched in the blood of war."--Huffington Post

"The stuff of Great American Literature. Like all destined classics, Meyer's second novel speaks volumes about humanity--our insatiable greed, our inherent frailty, the endless cycle of conquer or be conquered."--Publishers Weekly (starred review)

"Treading on similar ground to James Michener, Larry McMurtry, and Cormac McCarthy, Meyer brings the bloody, racially fraught history of Texas to life. Call it a family saga or an epic, this novel is a violent and harrowing read."--Library Journal

"An old-fashioned family saga set against the birth of Texas and the modern West, this is a riveting slow burn of love, power, and a legacy of violence spanning generations. Meyer is a writer of vast ambition and talent, and he has created nothing less than an American epic."--Parade