Home Therry, R. The Speeches of the Right Honourable George Canning. with a ... 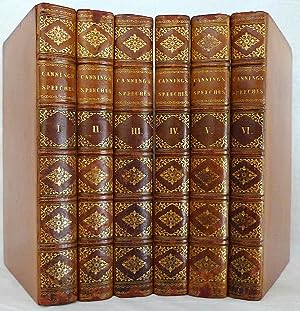 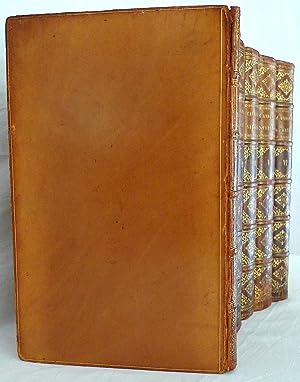 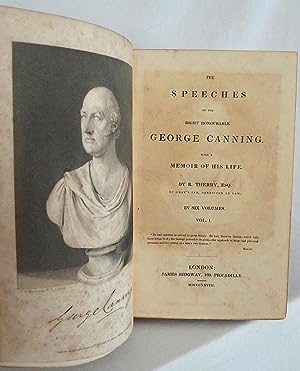 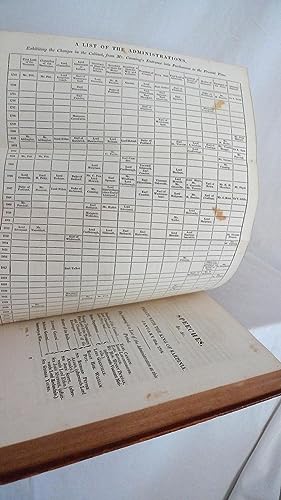 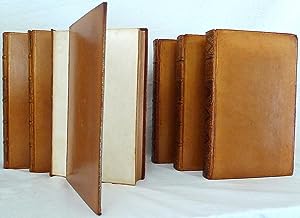 The Speeches of the Right Honourable George Canning. with a Memoir of his Life.

Title: The Speeches of the Right Honourable George Canning. with a Memoir of his Life. Author: Sir Roger Therry, Esq. Publisher: London: James Ridgway, 169, Piccadilly. Publication Date: 1828. About this Item: Therry was an Irish-Australian jurist and member of the New South Wales Legislative Council. He became acquainted with Canning when employed to edit his speeches and prepare them for publication. The speeches present in these volumes were published after Canning's death along with the life of Canning written by Therry. Canning was one of the most singular and remarkable of the leading statesmen of the first half of the nineteenth century, who was the only serving prime minister to sit in the Commons in this period, possessed undoubted and enviable talents, not least of which was the rich and varied oratorical eloquence which gave him an absolute ascendancy in the House. Damned at various times as a jester (by William Cobbett), an actor (by Henry Brougham) and a charlatan (by the duke of Wellington), even as sympathetic an observer as John Wilson Croker could joke that Canning never took tea without a stratagem , or could remark, in a perception that captured a not always articulated sense of unease about him, that his mind s eye squinted . In short, to the governing élite, who considered him too clever by half, Canning always seemed to stand slightly out of true; for Wellington, he was a man of imagination, always in a delusion [who] never saw things as they were . So it was a considerable testimony to his mental courage, which never failed him, and his physical resilience, which in the end did, that he overcame formidable obstacles to become, in the 1820s, an outstanding foreign secretary, which is how posterity rightly remembers him, and a surprisingly effective leader of the House of Commons, an office which he had always coveted. Nevertheless, on the eve of attaining the premiership in the spring of 1827, he was the cock of the walk to whom his chickens were to come home to roost. Description: 1800 Pp. Complete in six volumes. First Edition. Full period leather hard covers, gilt tooled spines with outer dentelles, (5) raised bands on spine covers, title and volume number labels on spine covers, dark tinted upper leaf edge (perhaps oxidized gilt), title page opposite steel engraved frontispeice bust of Canning, some facsimile annotated pages. Provenance: Book plate of Sir John Mordaunt Bart Of Walton Warwickshire, in each volume. Sir John Mordaunt, 7th Baronet was an English politician who represented the constituency of Warwickshire. He was born the son of Sir Charles Mordaunt, 6th Baronet and educated at New College, Oxford. He succeeded his father as 7th Baronet in 1778. He was a Captain in the Warwickshire militia from 1759 to 1763 and a Groom of the Bedchamber from 1763 to 1793. He was elected unopposed as the MP for Warwickshire from 1793 to 1802. He died in 1806. He had married Elizabeth, the daughter and coheiress of Thomas Prowse of Compton Bishop, Somerset, with whom he had 2 sons and 6 daughters. He was succeeded by his son Charles, who also became MP for Warwickshire in 1804. Measures: 8.75 H x 5.75 D x 1.25 W each (7.25 overall) inches. Book condition: Very good - good; front cover of volume I detached, edge wear/rubbing and some minor chips at spine crown/heels, (4) gently bumped corner tips, light foxing of end papers, light clean age toned tex pages, tight square bindings. A nice set. Buchnummer des Verkäufers 002207

Titel: The Speeches of the Right Honourable George ...