Verwandte Artikel zu The Square Root of In

Home Ferrini, Vincent The Square Root of In 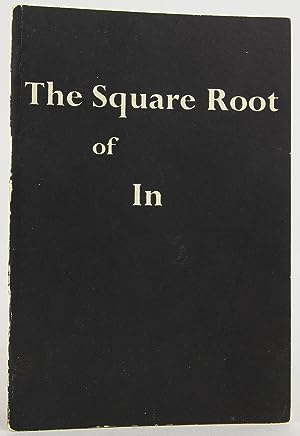 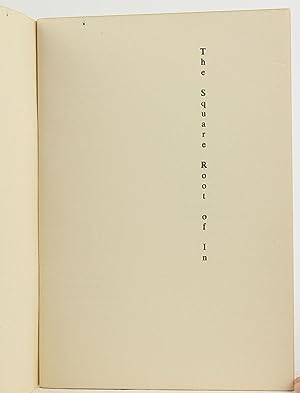 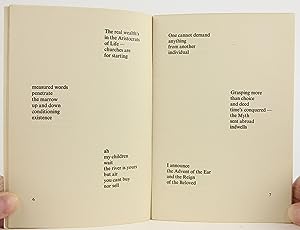 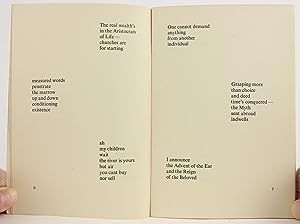 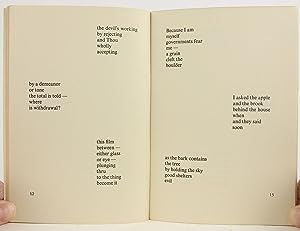 The Square Root of In

B001FOM3TQ 1957 signed and inscribed first edition, Heuretic Press (Gloucester, Massachusetts), 4 7/8 x 7 1/4 inches tall stapled paperbound in black covers, 52 pp. Moderate rubbing to covers, especially along spine. Inscribed and signed by the poet on the half title page. Tiny ink stain to top margin of title page. Otherwise, apart from slight age toning, a very good copy - clean and unmarked - of this rare poetry compilation, especially uncommon signed. ~U~ Venanzio Ugo 'Vincent' Ferrini (1913-2007)was an American writer and poet from Gloucester, Massachusetts. Vincent's parents, John and Rita Ferrini, were Christian anarchists who emigrated from Raiano and Bella, Italy in the region of Abruzzi to work in the shoe factories of Lynn, Massachusetts. Vincent's experience working in the shoe factories would instill a sensitivity for the life of the poor. Ignoring his father's warning that the son of a shoe worker could never become a poet, Vincent published his first volume of poetry, No Smoke, in 1940. He pursued his education in the Lynn Public Library and when the Great Depression hit, the young bard found work as a teacher in the WPA. In 1943, Mike Gold of the Daily Worker praised Injunction, a collection of working class vignettes set against the backdrop of World War II. In 1942 he married and left his job at General Electric to make a living as a frame maker. Vincent's move to Gloucester marked a shift in his poetry from the political and social to the personal and cosmic. Over the next 59 years, Gloucester became his place, where life and poetry combined. In 1949, after seeing a poem in the magazine Imagi, Charles Olson paid Ferrini a visit that Olson would later characterize the visit as a 'fan call.' Ferrini was the catalyst that brought together Olson and poet Robert Creeley. Later Olson addressed his first 'Maximus Poems' as letters to Vincent. Ferrini's first marriage ended in the 1960s after the death of his daughter. He later married the artist Mary Shore. When his second marriage ended in divorce he moved back to his frame shop at 126 East Main Street. The little shop became a nexus for many artists and writers who came to Gloucester. Vincent's view of the individual, the family, the community, and the nation working together for the common good compelled him to write editorials and letters not only to local Gloucester papers but also to The Boston Globe, The New York Times, and The Nation. At Gloucester City Hall he voiced his concerns at hundreds of council meetings. His focus was always the preservation of his city from what he characterized as 'the wildfire greed that will destroy the spirit and originality of his city.' Ferrini remained an academic outsider who never made a living solely from his writing. With vigor, creativity, and compassion he kept publishing for over 67 years, producing 31 volumes of poetry, four volumes of plays, and an autobiography. Vincent is the subject of his nephew Henry Ferrini's film Poem in Action. Buchnummer des Verkäufers U-1261-6871

Titel: The Square Root of In