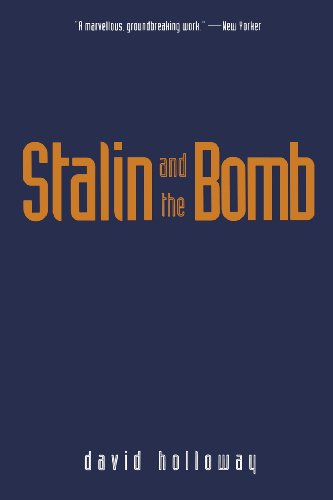 Stalin and the Bomb

Titel: Stalin and the Bomb

A distinguished authority tells the spellbinding story of the people and politics behind the development of the Soviet atom bomb. Based on interviews with participants and research in newly opened Soviet archives, the book reveals how the American atomic monopoly affected Stalin's foreign policy, the role of espionage in the evolution of the Soviet bomb, and the relationship between Soviet nuclear scientists and the country's political leaders. 'An indispensable contribution to our knowledge of the modern world.' Robert Conquest, 'London Review of Books' 'A perceptive, highly informative, and altogether excellent book.' Rudolf Peierls, 'New York Review of Books' 'A masterful account of the arms race from the Soviet side.' Gregg Herken, 'Washington Post Book World' 'A superb history that gives fresh insights into the cold war and, even more, into the conditions of intellectual life in Stalin's Russia. This study is a work on the largest scale, one that advances our understanding and is likely to remain definitive for years to come.' Priscilla Johnson McMillan, 'New York Times Book Review' Winner of the 1995 Vucinich Prize given for the best book in the field of Slavic studies and the Shulman Prize for the best book on Soviet and Post-Soviet Foreign Policy, both awarded by the American Association for the Advancement of Slavic Studies. David Holloway was born in Ireland and taught at Edinburgh University before becoming professor of political science and co-director, Center for International Security and Arms Control, at Stanford University. He is also the author of 'The Soviet Union and the Arms Race'.


Orders usually ship within 2 business days. Shipping costs are based on books weighing 1.6 LB, or 750gms. If your book order is heavy or oversized, we may contact you to let you know extra shipping is required.