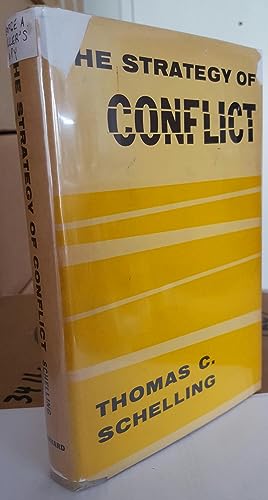 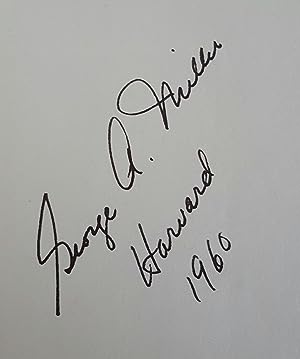 The Strategy of Conflict.

First Edition, first printing. vii, 1 leaf, 309 pp. Original cloth. Very Good, in dust jacket. Copy of Schelling's Harvard colleague George Armitage Miller (1920-2012), with his signature. Miller is cited on one page in the text. Thomas C. Schelling: Bank of Sweden Prize in Economic Sciences in Memory of Alfred Nobel, 2005 (shared with Robert J. Aumann), 'for having enhanced our understanding of conflict and cooperation through game-theory analysis.' 'Against the backdrop of the nuclear arms race in the late 1950s, Thomas Schelling's book The Strategy of Conflict set forth his vision of game theory as a unifying framework for the social sciences. Schelling showed that a party can strengthen its position by overtly worsening its own options, that the capability to retaliate can be more useful than the ability to resist an attack, and that uncertain retaliation is more credible and more efficient than certain retaliation. These insights have proven to be of great relevance for conflict resolution and efforts to avoid war. Schelling's work prompted new developments in game theory and accelerated its use and application throughout the social sciences. Notably, his analysis of strategic commitments has explained a wide range of phenomena, from the competitive strategies of firms to the delegation of political decision power' (Press release announcing Schelling's Nobel Prize). 'A series of closely interrelated essays on game theory, this book deals with an area in which progress has been least satisfactory--the situations where there is a common interest as well as conflict between adversaries: negotiations, war and threats of war, criminal deterrence, extortion, tacit bargaining. It proposes enlightening similarities between, for instance, maneuvering in limited war and in a traffic jam; deterring the Russians and one's own children; the modern strategy of terror and the ancient institution of hostages' (Harvard University Press Web site). 'Schelling's most famous book, The Strategy of Conflict (1960), has pioneered the study of bargaining and strategic behavior and is considered one of the hundred books that have been most influential in the West since 1945. In this book he introduced the concept of the focal point, now commonly called the Schelling point' (Wikipedia). 'Most of the people studying game theory in the 1950s were interested in more abstract questions. But what Schelling did was apply game theory to economics, business, everyday life, warfare, things that people really care about' (Drew Fudenberg, Harvard University economics professor, quoted in Robert Weisman, '2 game theorists share a Nobel,' Boston Globe, Oct. 11, 2006, Business section, pp. E1, E4). Buchnummer des Verkäufers 23367

Titel: The Strategy of Conflict.