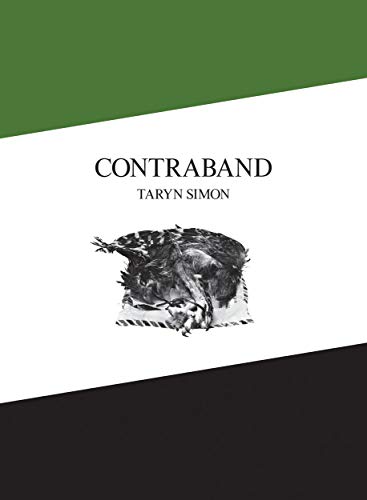 This publication reissues a much sought-after photobook. Taryn Simon is an American artist whose works combine photography, text and graphic design. Her practice involves extensive research, in projects guided by an interest in systems of categorization and classification. For Contraband, 1,075 photographs were taken at both the US Customs and Border Protection Federal Inspection Site and the US Postal Service International Mail Facility at John F. Kennedy International Airport, New York. From November 16 to November 20, 2009, Simon remained on site and continuously photographed items detained or seized from passengers and express mail entering the United States from abroad. The list of items includes pork, syringes, Botox, GBL date rape drug, heroin, imitation Lipitor, Ketamine tranquillizers, Lidocaine, Lorazepam, locust tree seed, ginger root, deer tongues, cow urine, Cohiba cigars and Egyptian cigarettes. The volume is published in three differently colored covers.Taryn Simon (born 1975) has been the subject of monographic exhibitions at Ullens Center for Contemporary Art, Beijing (2013); The Museum of Modern Art, New York (2012); Tate Modern, London (2011); Neue Nationalgalerie, Berlin (2011); and Whitney Museum of American Art, New York (2007). Her work is in the permanent collections of The Metropolitan Museum of Art, Tate Modern, Whitney Museum of American Art, Centre Georges Pompidou and Museum of Contemporary Art, Los Angeles, and was included in the 54th Venice Biennale in 2011 and the Carnegie International in 2013. She is a graduate of Brown University and a Guggenheim Fellow. Simon lives and works in New York. Buchnummer des Verkäufers 192420

For Contraband (2010), Simon spent a working week at John F. Kennedy International Airport, making over a thousand photographs of items that had been seized by customs officials, from dead animals and exotic fruit to a parade of counterfeit pharmaceuticals and luxury items...The project was systematic at the same time that it revealed the impossibility of systematic accounts of human experience: The more detail Simon supplied, the more the observer became aware of how many more details could be piled on.--Teju Cole "The New York Times "