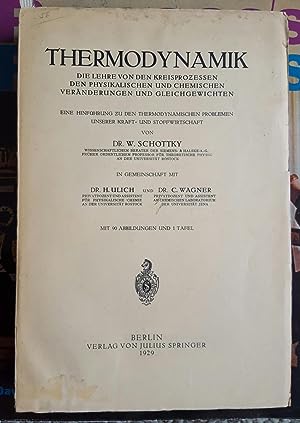 First Edition. xxv, 619 pp; 90 figs.; table. Original printed wrappers (published simultaneously in cloth), 8vo (25 x 17 cm). Very Good+. A 1912 doctoral candidate under Max Planck at Berlin University, Schottky was 'a German physicist who invented the screen-grid vacuum tube in 1915 and the tetrode in 1919 while working at Siemens. In 1938, Schottky formulated a theory predicting the Schottky effect, now used in Schottky diodes. He was awarded the Royal Society's Hughes medal in 1936 for his discovery of the Schrot effect (spontaneous current variations in high-vacuum discharge tubes, called by him the 'Schrot effect': literally, the 'small shot effect') in thermionic emission and his invention of the screen-grid tetrode and a superheterodyne method of receiving wireless signals. . . . His father was mathematician Friedrich Hermann Schottky (1851 1935)' (Wikipedia). 'Famous book' (M. Martin, 'Life and achievements of Carl Wagner, 100th birthday', Solid State Ionics, Vols. 152-153, Dec. 2002, pp. 15-17). 'Throughout the 1920's Schottky gathered material, which eventually appeared in 1929 in his book on thermodynamics, Thermodynamik. It presented the thermodynamic theory of solids with very low impurity content or with small deviations from stoichiometry. He was one of the first to point out the existence of electron 'holes' in the valence-band structure of semiconductors' (Schottky biography on Geocities). 'Walter Schottky (1886-1976) developed industrial applications of thermodynamics and wrote a famous textbook 'Thermodynamik' (Werner Ebeling, 'Thermodynamics Past, Present and Future', Advances in Solid State Physics, Vol. 45, 2005, pp. 3-14). 'Walter Schottky (1886-1976) did much for the practical application of the theory' (W. Ebeling & D. Hoffman, 'The Berlin School of Thermodynamics founded by Helmholtz and Clausius', Eur. J. Phys. 12, 1-9, 1991). 'The history of thermodynamics is closely connected with a scientific school founded in Berlin by Hermann Helmholtz and Rudolf Clausius in the 1840s. Other great scientists which belonged to this school were Kronig, Kirchhoff, Planck, Nernst, Caratheodory, Einstein, Warburg, Debye, Schottky, Schrodinger, Szilard and von Neumann. Not only the foundation of the three laws of thermodynamics but also many important applications especially to chemical reactions and to radiation processes, as well as the statistical foundation of thermodynamics are closely connected with the work of these pioneers and their students' (Abstract of Ebeling & Hoffman). 'As far as I am aware, only three authors have used the concept of constraints in thermodynamics. Schottky (1929) clearly stated the concept in several sections' (Gregor M. Anderson, 'Truth and Beauty in Thermodynamics', The Canadian Mineralogist, Vol. 43, pp. 11-19, 2005). 'Notable for rigorous examination of fundamentals' (Donald Howard Menzel, Fundamental Formulas of Physics, 1960, p. 276). Buchnummer des Verkäufers 17000