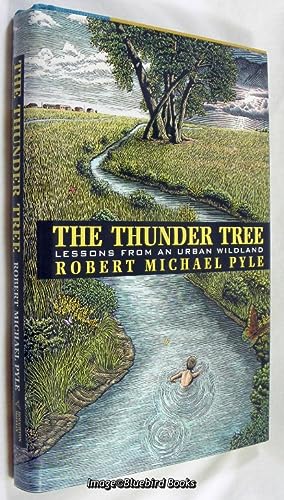 The Thunder Tree Lessons from an Urban Wildland

Accomplished naturalist's work focuses on finding nature in an urban environment. With publication card laid in with signed remarks from author to recipient; as well as mailed bookstore invitation to attend booksigning of this work. In top shape, clean and crisp copy. ; 0.5 x 6.8 x 4.1 Inches; 220 pages; Signed by Author. Buchnummer des Verkäufers 73078

Titel: The Thunder Tree Lessons from an Urban ...

When people connect with nature, they do so in a specific place, and The Thunder Tree shows how that connection can change a life forever, how roots in the earth can be as important as roots in a family. For Bob Pyle, that place was the Highline Canal in Colorado. When he first discovered it as a boy in the 1950s, the canal and its surroundings were largely a wasteland, an accidental wilderness on the edge of a growing city. But as he grew up, the canal became his sanctuary, his teacher, the place where he developed a passion for the natural world. Once, a stately cottonwood along its banks literally saved his life during a freak hailstorm.
By showing how the course of a life can be changed by a piece of land, Robert Michael Pyle argues eloquently that if we fail to preserve our opportunities to explore nature, we will diminish our lives and our culture immeasurably. Rich in history, poignant, and beautifully written, this is a book you will never forget.

YOUR EXPECTATIONS AND MY PROMISE: Bluebird Books is an independent, internet-based bookseller in metro Denver, Colorado (USA) and operated by me, Eric Mayer. I am proud to be a member of both the Rocky Mountain Antiquarian Booksellers Association (RMABA) and the Independent Online Booksellers Association (IOBA). I imagine that you expect to be getting a quality item which has been accurately described, carefully packed, and promptly shipped to you. That is also my promise to you.


DESCRIPTIONS & RETURNS:
All items are sold on a satisfaction guaranteed basis. I guarantee the condition of every item as described. If you are dissatisfied with your purchase because it is not as described, I will refund the price of the item plus shipping costs both ways. If you've changed your mind about an item, or you just want to return it, I will ask that you pay for the shipping and I'll cheerfully refund the price of the book. In either case, items must be returned within 30 days of the...


SHIPPING:
I ship my books promptly (almost always on the next business day after order or sooner) from my base in Colorado in well-wrapped, crush- and moisture-resistant protective packaging. US shipments and to many other countries include Delivery Confirmation bar coding, so you can track the progress of your shipment. NOTE: For extra-heavy items, extra shipping charges may be requested.