Verwandte Artikel zu From Time Immemorial; The Origins of the Arab-Jewish... 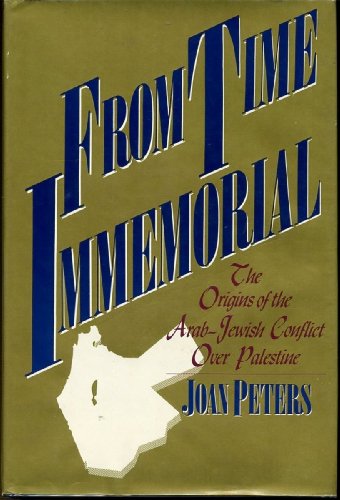 From Time Immemorial; The Origins of the Arab-Jewish Conflict Over Palestine

x, [2], 603, [7] pages. Appendices. Notes. Bibliography. Index. DJ has some wear, tears, chips and soiling. Front board had some weakness and has been restrengthened with glue. Joan Peters (née Friedman; April 29, 1936 - January 5, 2015), later Caro, was a journalist and broadcaster. She wrote the 1984 book From Time Immemorial, a controversial account of the origins of the Palestinians. In the 1970s and early 1980s, Peters wrote for magazines such as Harper's, Commentary, The New Republic, and The New Leader, was a consultant in the creation of CBS news documentaries in 1973 about the Israeli-Palestinian conflict, and provided commentary on the subject for PBS. Her dedication to the cause of Israel may have been triggered by a visit in the 1970s to the Soviet Union, where officials treated her and her husband with suspicion. According to the Walker Agency, which booked speaking and touring engagements for her, Peters also served as an adviser to the White House on American foreign policy in the Middle East during the Carter administration. In From Time Immemorial (1984), she argued that Palestinians are largely not indigenous to modern Israel and therefore have no claim to its territory. The book, a best-seller, became controversial. Scholars and writers such as Norman Finkelstein, Noam Chomsky, Edward Said, Yehoshua Porath. and Ian and David Gilmour criticized it. Shortly before her death, the Israeli ambassador to the United Nations, Ron Prosor, telephoned to convey to her that Israel's prime minister Benjamin Netanyahu was deeply grateful for her work. This monumental and fascinating book, the product of seven years of original research, will forever change the terms of the debate about the conflicting claims of the Arabs and the Jews in the Middle East. The weight of the comprehensive evidence found and brilliantly analyzed by historian and journalist Joan Peters answers many crucial questions, among them: Why are the Arab refugees from Israel seen in a different light from all the other, far more numerous peoples who were displaced after World War II? Why, indeed, are they seen differently from the Jewish refugees who were forced, in 1948 and after, to leave the Arab countries to find a haven in Israel? Who, in fact, are the Arabs who were living within the borders of present-day Israel, and where did they come from? Joan Peters's highly readable and moving development of the answers to these and related questions will appear startling, even to those on both sides of the argument who have considered themselves to be in command of the facts. On the basis of a definitive weight of hitherto unexamined population and other historical data, much of it buried in untouched archives, Peters demonstrates that Jews did not displace Arabs in Palestine-just the reverse: Arabs displaced Jews; that a hidden but major Arab migration and immigration took place into areas settled by Jews in pre-Israel Palestine; that a substantial number of the Arab refugees called Palestinians in reality had foreign roots; that for every Arab refugee who left Israel in 1948, there was a Jewish refugee who fled or was expelled from his Arab birthplace at the same time-today's much discussed Sephardic majority in Israel is in fact composed mainly of these Arab-born Jewish refugees or their offspring; that Britain, the Mandatory power, winked at and even encouraged Arab immigration into Palestine between the two World Wars; that by disguising the Arab immigrants as "indigenous native Palestinian Arabs," the British justified their restrictions on Jewish immigration and settlement, dooming masses of European Jews to destruction in the Nazi camps. Joan Peters also unfolds a historical record to shatter the widely held belief that Arabs and Jews harmoniously coexisted for centuries in the Arab world-the fact is that the Jews, along with other non-Muslims, were second-class citizens, oppressed in the Muslim world for more than a millennium. And this continuing prejudicial tradition of hostility underlies, as well, every Arab action toward the state of Israel. In addition to her pioneering archival researches, Joan Peters has frequently traveled in the Middle East, conducting numerous interviews and gathering the personal observations of the first-rate reporter she is. The result is a book that has already had a major impact on policy discussions of one of the most vital and intractable of the world's problems, shrouded until now in a fog of misinformation and ignorance. Bestandsnummer des Verkäufers 50592

Titel: From Time Immemorial; The Origins of the ...