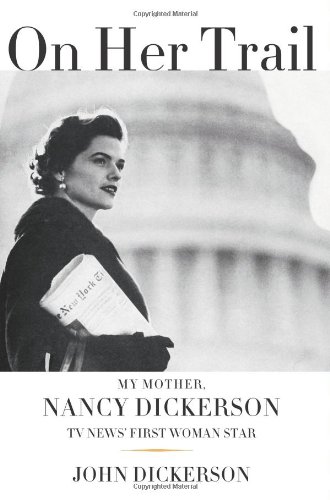 x, [2], 335, [5] pages. Illustrations. Index. Signed on title page. Slip from the Aspen Institute Aspen Why Fellows Event in 2008 laid in. Cover has slight wear and soiling. Dickerson is the host of Face the Nation on CBS News, the political director of CBS News, and a political columnist for Slate magazine. Before hosting Face the Nation, he was the longtime Chief Political Correspondent at Slate. Before joining Slate, Dickerson covered politics at Time magazine for 12 years, serving the last four years as their White House correspondent. The former White House correspondent for "Time" magazine examines his stormy relationship with his legendary mother, Nancy Dickerson--the first female member of the Washington, D.C., television news corps and the first female host of the "Today" show. Nancy Dickerson (January 19, 1927 - October 18, 1997) was a pioneering American radio and television journalist. As famous as a celebrity and socialite as she was for her journalism, she later became an award-winning independent producer of documentaries. She became a Senate Foreign Relations Committee researcher and developed a passion for the inner workings of government which would define her career of more than four decades. Although the field of television journalism was almost entirely dominated by men at the time, Dickerson got her break in 1954, when she was hired by CBS News's Washington bureau to produce a radio show called Capital Cloakroom. She would also become associate producer of Face the Nation. In 1960, CBS made her its first female correspondent. She reported for NBC News from 1963 to 1970, covering all the pivotal stories of that time: political conventions, election campaigns, inaugurations, Capitol Hill, and the White House. She is noted as being the first woman correspondent on the floor of a political convention. In 1963, she covered the 1963 March on Washington for Jobs and Freedom, in which Martin Luther King, Jr., delivered his famous "I Have a Dream" speech. She was also part of NBC's coverage of President Kennedy's assassination and funeral. Dickerson left the network in 1971 to become an independent broadcaster and producer, syndicating a daily news program, Inside Washington. In 1980, she founded the Television Corporation of America, through which she produced documentaries for PBS and others. Most notable among these was "784 Days That Changed America-From Watergate to Resignation," for which she received a Peabody Award and the Silver Gavel Award from the American Bar Association. Presumed First paperback edition. First printing [stated]. Bestandsnummer des Verkäufers 72816

Titel: On Her Trail; My Mother, Nancy Dickerson, TV...

A former White House correspondent for Time magazine examines his stormy relationship with his mother, describing his mother's role as a pioneering woman journalist, the lavish political soirees that marked his parents' marriage, and his feelings of ambivalence about his mother's perpetual absence throughout his youth. 75,000 first printing.