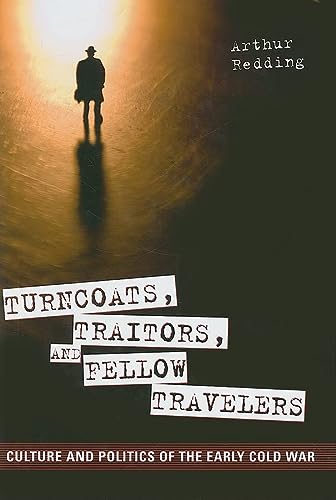 Turncoats, Traitors, and Fellow Travelers: Culture and Politics of the Early Cold War

Book and DJ New. NO defects. NO notes. No markings of any kind. Unclipped, unpriced DJ. ; 183 pages. Buchnummer des Verkäufers 59570

The Cold War was unique in the way films, books, television shows, colleges and universities, and practices of everyday life were enlisted to create American political consensus. This coercion fostered a seemingly hegemonic, nationally unified perspective devoted to spreading a capitalist, socially conservative notion of freedom throughout the world to fight Communism. In Turncoats, Traitors, and Fellow Travelers: Culture and Politics of the Early Cold War, Arthur Redding traces the historical contours of this manufactured consent by considering the ways in which authors, playwrights, and directors participated in, responded to, and resisted the construction of Cold War discourses. The book argues that a fugitive resistance to the status quo emerged as writers and activists variously fled into exile, went underground, or grudgingly accommodated themselves to the new spirit of the times. To this end, Redding examines work by a wide swath of creators, including essayists (W. E. B. Du Bois and F. O. Matthiessen), novelists (Ralph Ellison, Patricia Highsmith, Jane Bowles, and Paul Bowles), playwrights (Arthur Miller), poets (Sylvia Plath), and filmmakers (Elia Kazan and John Ford). The book explores how writers and artists created works that went against mainstream notions of liberty and offered alternatives to the false dichotomy between capitalist freedom and totalitarian tyranny. These complex responses and the era they reflect had and continue to have profound effects on American and international cultural and intellectual life, as can be seen in the connections Redding makes between past and present.