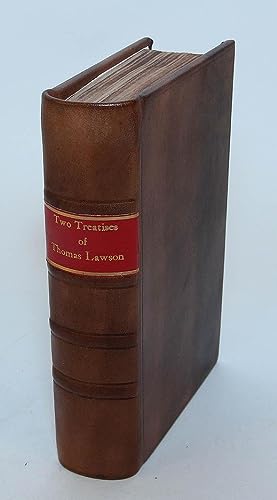 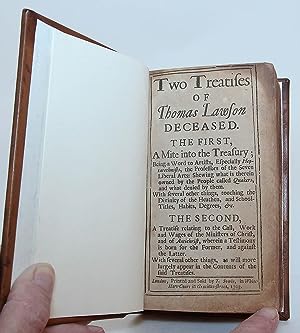 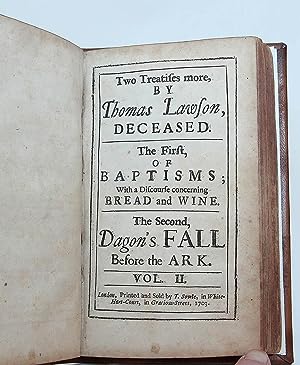 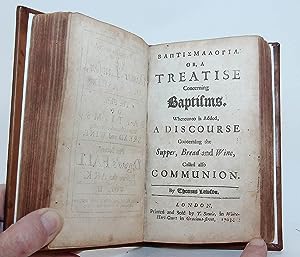 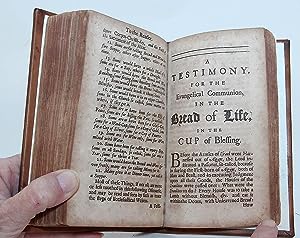 B00ILG44V6 1703 'Printed and Sold by T. Sowle, in White-Hart-Court, in Gracious-Street' (London), two volumes bound in one (see complete titles below), 4 x 6 3/4 inches tall x 1 1/2 inches thick full leather bound, four raised bands and gilt-titled crimson leather label to spine, refreshed endpapers, 288, [2], 168, 96 pp. Except for the blank endpaper between the two volumes, lacks original blanks; otherwise complete. A bit of mild tanning, staining and foxing to pages, mainly title pages. In all other respects, a very good, handsome copy of this two-volume work. Gives a splendid shelf appearance. An important set of works by this respected early botanist and Quaker. Also notable as an early work from a female Quaker printer, Tace Sowle (see below). Quite scarce; the English Short-Title Catalog records only seven institutions worldwide which hold both volumes. References: ESTC Nos. N4715, T111560; Smith, J. Friends' books, 2.91. ~JJJ~ Thomas Lawson (1630 - 1691) was an English botanist and Quaker. Born at Lawkland, near Settle, Yorkshire, England, and educated at Giggleswick, graduating in 1656, Lawson was adept in Hebrew, Greek and Latin. George Fox visited him in Lancashire in 1652, and he was invited to preach in church. Lawson soon after became convinced of the unlawfulness of preaching for hire, and at twenty-three gave up his living to join the Quakers. He was not a preacher, though he was clerk to the monthly meetings for many years. He was frequently distrained upon for non-payment of tithe, and possibly imprisoned. Gerard Croese called him the most noted herbalist in England. Noted English naturalist John Ray (1627 - 1705), with whom he was on intimate terms, speaks of Lawson as a 'diligent, industrious, and skilful botanist,' and he was asked to contribute to 'Synopsis Methodica Insectorum' which Ray contemplated but did not live to complete. Thomas Robinson in his 'Essay towards a Natural History of Westmoreland and Cumberland' used manuscripts supplied by Lawson's daughter. Several English plants were first noted by him, and 'Hieracium Lawsonii' was named after him. About the printer: Tace Sowle, born around 1665, was the daughter of Andrew and Jane Sowle, both printers. She served her apprenticeship under her father, taking on his mantle as a principal Quaker publisher when his eyesight began to fail. Her name appears from 1691 onwards. After Andrew's death in 1695, she ran the printing press at the Crooked Billet In Holloway Lane, Shoreditch, London, as well as her other printing address, where these works were produced, 'next door to the meeting house in White Hart Court, Gracious Street,' first with her mother and, after her mother's death in 1711, with her husband Thomas Raylton. Although a hosier, he helped her until his death in 1723 and she continued alone until 1738 when she went into partnership with Luke Hinde, a nephew. They continued together until Tace's death in 1749 at the age of 84, the oldest printer in London. COMPLETE TITLES: 'Two treatises of Thomas Lawson deceased. The first, A mite into the treasury; Being a Word to Artists, Especially Heptatechnists, the Professors of the Seven Liberal Arts; Shewing What is Therein Owned by the People Called Quakers, and What Denied by Them. With Several Other Things, Touching the Divinity of the Heathen and School-Titles, Habits, Degrees, Etc. The second, A Treatise Relating to the Call, Work and Wages of the Ministers of Christ, and of Antichrist, Wherein a Testimony is Born for the Former, and Against the Latter. With Several Other Things, As Will More Largely Appear in the Contents of the Said Treatises,' bound with 'Two Treatises More, by Thomas Lawson, Deceased. The First, of Baptisms; With a Discourse Concerning Bread and Wine. The Second, Dagon's Fall Before the Ark.'. Buchnummer des Verkäufers JJJ-0241-356