Verwandte Artikel zu The Universality of Physics: A Festschrift in Honor... 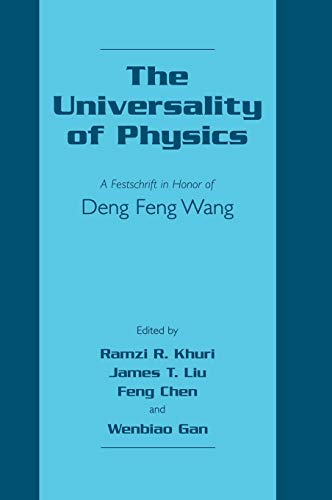 The Universality of Physics: A Festschrift in Honor of Deng Feng Wang

Titel: The Universality of Physics: A Festschrift ...

Deng Feng Wang was born February 8, 1965 in Chongqing City, China and died August 15, 1999 while swimming with friends in the Atlantic Ocean off Island Beach State Park, New Jersey. In his brief life, he was to have an influence far beyond his years. On August 12th 2000, The Deng Feng Wang Memorial Conference was held at his alma mater, Princeton University, during which Deng Feng's mentors, collaborators and friends presented scientific talks in a testimonial to his tremendous influence on their work and careers.
The first part of this volume contains proceedings contributions from the conference, with plenary talks by Nobel Laureate Professor Phil Anderson of Princeton University and leading Condensed Matter Theorists Professor Piers Coleman of Rutgers University and Professor Christian Gruber of the University of Lausanne. Other talks, given by collaborators, friends and classmates testify to the great breadth of Deng Feng Wang's influence, with remarkable connections shown between seemingly unrelated areas in physics such as Condensed Matter Physics, Superconductivity, One-Dimensional Models, Statistical Physics, Mathematical Physics, Quantum Field Theory, High Energy Theory, Nuclear Magnetic Resonance, Supersymmetry, M-Theory and String Theory, in addition to such varied fields outside of physics such as Oil Drilling, Mixed Signal Circuits and Neurology. The second part of the volume consists of reprints of some of Deng Feng Wang's most important papers in the areas of Condensed Matter Physics, Statistical Physics, Magnetism, Mathematical Physics and Mathematical Finance. This volume represents a fascinating synthesis of a wide variety of topics, and ultimately points to the universality of physics and of science as a whole. As such, it represents a fitting tribute to a remarkable individual, whose tragic death will never erase his enduring influence.

Tiber Books is an internet merchant with over 35 years of bookselling experience -- we've been offering our holdings online for nearly 20 years now. The majority of our inventory is scholarly non-fiction in both the sciences and the humanities, but we also carry an increasing selection of additional material in Americana, Art, History of Science and Technology, Regional U.S. History, Religion, and many other subjects. You can search our inventory by author and/or title. However, we also understand the need to browse by subject matter, and therefore make extensive use of Keywords in listing each of our books. You should have good results if you experiment with Keyword searches of our inventory. We also include a book's ISBN (if it has one), so if you'd like to search by ISBN, please use ABE's Advanced Search menu -- omit the dashes from the number when searching by ISBN. Enjoy browsing!


All books are subject to prior sale. Maryland residents, add 6% sales tax. RETURNS are accepted within 2 weeks for any reason; please notify us in advance so that we'll know to expect the book.

We pack all books in bubble-wrap, and ship in a sturdy cardboard box (except in the case of standardized Priority Mail and Global Priority Airmail envelopes for international shipments).

PLEASE NOTE: Shipping costs are based on books weighing 2.2 LB, or 1 KG. If your book order is heavy or oversized, we may contact you to let you know that extra shipping is required.