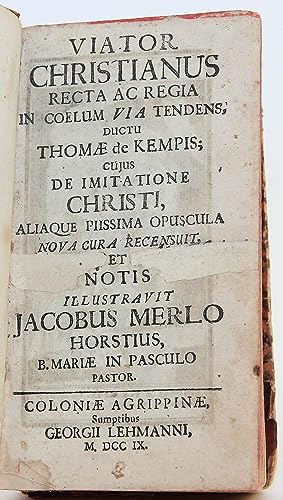 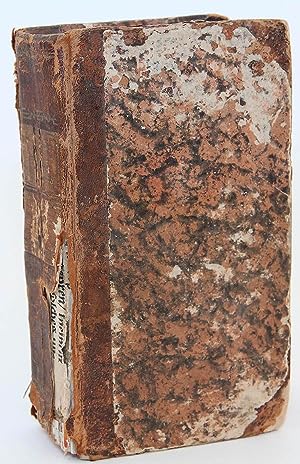 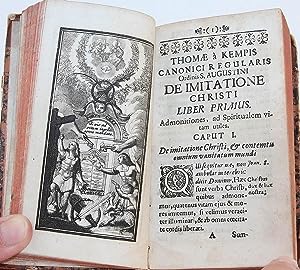 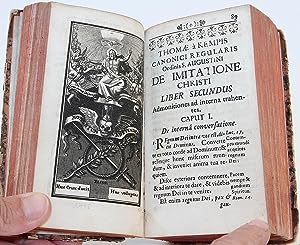 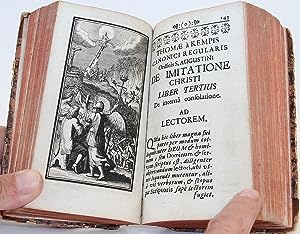 B00L73KHES In Latin. 1709 Sumptibus Georgii Lehmanni (Cologne, Germany), 3 1/4 x 5 1/2 inches tall hardbound, marbled paper covered boards over leather spine, all page edges red, engraved frontispiece and a full-page engraving preceding each of the four books of the main work, [70], 439, [13] pp., complete. Covers rubbed and edgeworn, with cracking to both hinges and a section of the lower backstrip lacking, yet the binding holds firm. Nineteenth and twentieth century ink inscriptions to front free-endpaper. Prior owner name to title page covered with paper, not interfering with the title, but visible through the page on the frontispiece, which is on the verso of the title page. Creasing to the lower tip of the last 15 or so leaves of the book, from page 415 onward. Light pencil notations to top of rear free-endpaper. Otherwise, apart from an occasional minor instance of light foxing or minor creasing, a remarkably good copy - clean, bright and unmarked - of a very scarce edition of the devotional classic, 'The Imitation of Christ,' with wonderful engravings and Jesuit-inspired supplementary materials. Appears to have been the first volume of a two-volume set of selected works of Thomas a Kempis (circa 1380-1471), complete unto itself, containing a complete edition of the 'Imitation,' his best-known work, with commentary in the margins from Cologne priest and theologian Jacob Merlo Horstius (d. 1644). Preceding the 'Imitation' are 70 unnumbered pages, containing prefatory materials which include an elegy to Kempis with brief descriptions of a number of Catholic luminaries - mainly Jesuits - for whom the Imitation was an important influence, including Ignatius of Loyola (1491-1556), Cardinals Caesar Baronius (1538-1607) and Robert Bellarmine (1542-1621), Georg Mayr (1564-1623), Henry Sommalius (d. 1619) and Herman Hugo (1588-1629). The 42 unnumbered pages which directly precede the Imitation is an introduction which sets forth the three-part method of mystical practice established in the Imitation, beginning with the 'via purgativa' (the purgative) moving on to the 'via illuminativa' (the illuminitive) and culminating with the 'via unitiva' (the unitive). Following the text of the Imitation, there is a 10-page 'Oratio de Passion. Domin.,' a detailed table of contents to the Imitation, a one-page message to the 'pious reader' signed simply I.M.H. (perhaps the initials of the otherwise anonymous editor of this volume) and finally, a three-page index of prayers in the Imitation. ~KM1~ Thomas a Kempis (circa 1380-1471) was an Augustinian monk, priest, copyist and scholar, and the most probable author of 'The Imitation of Christ,' one of the best known Christian devotional works, among many other published writings. He spent most of his long life at Mount Saint Agnes monastery, in the town of Windesheim, located in what is now the Netherlands. He wrote these works for the instruction of novices of his monastic order, followers of Geert Groote's Brethren of the Common Life, but over the years they became popular among the faithful worldwide. Jacob Merlo Horstius, born in 1597 in Horst, Holland, from whence he derives his name, was a prominent doctor of theology known as an effective preacher at the Lyskirchen in Cologne, where he served as pastor and where he died in 1644. He authored and edited numerous works, including a highly respected commentary of Estius on the Pauline Letters; the works of St. Bernard and of Thomas a Kempis. Buchnummer des Verkäufers KM2-0641-904