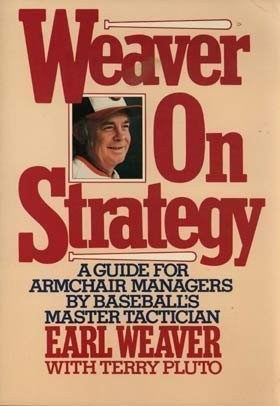 [4],187, [1] pages. Some illustrations. Cover has slight wear and soiling. The cover states that this is a Guide for Armchair Managers by Baseball's Master Tactician. Earl Sidney Weaver (August 14, 1930 - January 19, 2013) was an American professional baseball player, Hall of Fame Major League manager, author, and television broadcaster. After playing in minor league baseball, he retired without playing in Major League Baseball (MLB). He became a minor league manager, and then managed in MLB for 17 years with the Baltimore Orioles (1968-82; 1985-86). Weaver's style of managing was summed up in the quote: "pitching, defense, and the three-run homer." He did not believe in placing emphasis on "small ball" tactics such as stolen bases, hit and run plays, or sacrifice bunts. He spent a total of 26 years managing baseball teams, In 21 of those years his clubs finished first or second. He was inducted into the Baseball Hall of Fame in 1996. Earl's oft-quoted managerial philosophy was "pitching, defense, and the three-run homer." Weaver expanded on his philosophy in three books he authored: Winning! (1972); It's What You Learn After You Know It All That Counts (1983); and Weaver on Strategy (1984), which was republished as Weaver on Strategy: The Classic Work on the Art of Managing a Baseball Team (2002, with co-author Terry Pluto). Weaver eschewed the use of so-called "inside baseball" or "small ball" tactics such as the stolen base, the hit and run, or the sacrifice bunt, preferring a patient approach ("waiting for the home run"), saying "If you play for one run, that's all you'll get" and "On offense, your most precious possessions are your 27 outs" First Collier Books Edition [stated]. Presumed first printing. Bestandsnummer des Verkäufers 74980

A guide to managing a baseball team includes discussions of pitching, fielding, spring training, playing tactics, and dealing with umpires