Home Patrick, Symon [Simon] The Witnesses to Christianity; Or, the Certainty of Our Faith ... 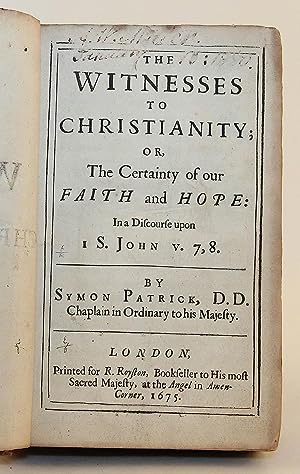 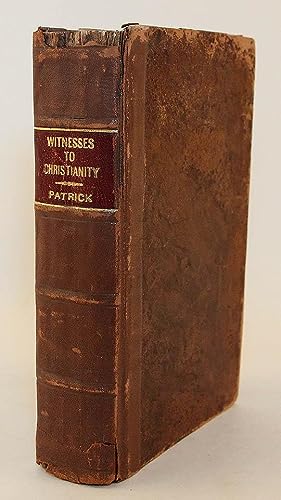 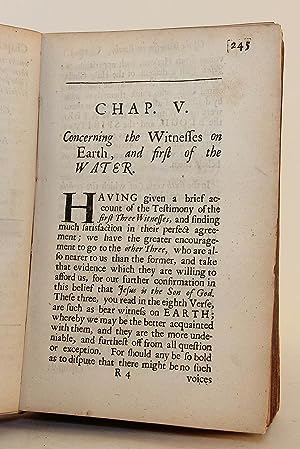 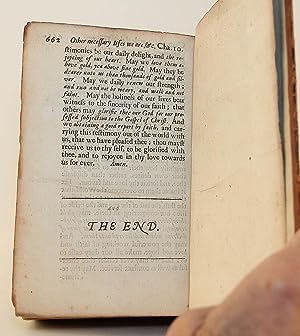 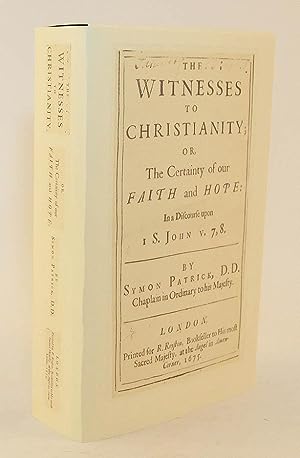 The Witnesses to Christianity; Or, the Certainty of Our Faith and Hope: In a Discourse Upon I S. John V. 7,8.

B00JXS3PLG 1675 'Printed for R. Royston, bookseller to His most sacred Majesty, at the Angel in Amen-Corner' (London), 4 1/2 x 7 1/4 inches tall full leather bound, four raised bands and gilt-lettered red leather label to spine, [18], 662 pp. Lacking blank endpapers, but otherwise complete. Boards rubbed and edgeworn. Significant cracking along spine, which appears to have been glued at some point. Cracking to top and bottom of exterior front hinge, with brown binder's tape inside between pastedowns and half-title/rear endpaper. Early (perhaps seventeenth century) bookplate to front pastedown. Tiny pinholes to top of title page, with an attempt to erase a prior owner name at some point, but without loss to type. In all other respects, a good, complete copy. Provided in a custom Brodart rare book box, made from archival-quality, acid-free, lignin-free stock, securely held in place by Velcro buttons, with the title page reproduced on the front of the box, and title to spine. ~PPP~ Simon Patrick (1626-1707) was an English theologian and bishop. His sermons and devotional writings are numerous, and his Commentary on the Historical and Poetical Books of the Old Testament, in 10 vols., going as far as the Song of Solomon, was reprinted in the 1810 Critical Commentary on the Old and New Testaments and Apocrypha, with works Richard Arnald Moses Lowman William Lowth and Daniel Whitby. The first collected edition of his works appeared at Oxford in 1858 (9 vols.), edited by Alexander Taylor; a small Autobiography was published also at Oxford in 1839. Buchnummer des Verkäufers PPP-0441-577

Titel: The Witnesses to Christianity; Or, the ...
Verlag: Printed for R. Royston Bookseller to His Most Sacr
Erscheinungsdatum: 1675
Einband: LEATHER BOUND
Zustand: Fair