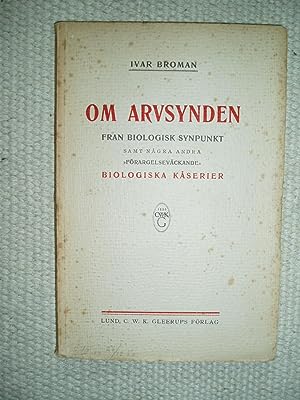 20x13cm, 88 pp., Danish sociologist C. W. Starcke's copy, with his name stamped on title-page. "The Swedish physician and Professor of Anatomy Ivar Broman (1868-1946) came from a poor countryside family in the province of Skĺne, southern Sweden. As he was intelligent and talented he received help from local people to get him an education at the nearby University of Lund. He stayed both there and at the University in Uppsala, but also in Kiel, Germany, during his early years. Soon Ivar Broman showed his dedication for embryology and comparative anatomy, publishing several books and papers. Later on he also wrote several contributions for daily newspapers, telling about new scientific discoveries and public health related issues. At one occassion Ivar Broman went to Africa for collecting embryos of different mammals. In the political world he showed strong emotional ties to Germany where he had several friends and contacts in medicine. This led Ivar Broman to sign, among 400 other people, a pamphlet calling for establishing a Swedish-German friendship organisation in 1938. He was not a party member of any Nazi party, but was, similar to other of his contemporary friends and scientists, an admirer of German science and culture. In some of his writings Broman was very modern in try to popularize science and new discoveries, but also devoted to aspects of purifying the population and using racial biological arguments. The lesson from Ivar Broman is that a devoted and skilled scientist, with many modern views, could also hold some authoritarian and politically darker views. This could be an example of a "Faustian" dilemma in science during a Some rubbing. Spotting to covers. Good. Buchnummer des Verkäufers 023698