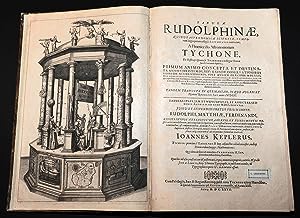 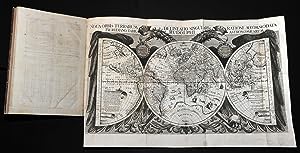 Ulm: Jonas Saur, 1627. 4 parts in one, folio (326 x 224 mm). Roman and Italic types, double column, printed shoulder notes. Engraved allegorical frontispiece of the Temple of Urania with astronomers, by George Celer after Kepler, LARGE ENGRAVED FOLDING MAP OF THE WORLD (435 x 710 mm), a few woodcut text diagrams, including a full-page of diagrams on k3v, woodcut initials, large woodcut device on part 2 section title. With the 4-leaves "Sportula genethliacis missa" (q4) dated 1629, inserted before the tabulae. Cased binding. FIRST EDITION, INCLUDING THE VERY RARE WORLD-MAP Nova orbis terrarum delineatio, "conceived by the German cartographer Philip Eckebrecht at the request of his friend Johann Kepler" (Shirley), to be used with his Tabulae Rudolphinae, engraved at Nuremberg by J.P. Walch and dated 1630 (but perhaps issued later), and Kepler's 4-leaf supplement of directions (signed q4), "Sportula genethliacis missa" (printed in Sagan, Prussia, 1629). It does not include the appendix by Jacob Bartsch found in a few copies. The first quire is found here in its third issue. The Rudolphine Tables is a monumental work in which the great astronomer Kepler provided the data by which the positions of the planets could be computed. It was the first book to require the use of logarithms which had recently been invented by John Napier. Kepler's tables were about 30 times better than any previous ones and were the primary source of recognition for his work in astronomy in the decades following their publication. He used the tables to predict a transit of Mercury which was observed by Pierre Gassendi in 1631. This successful observation added weight to the case for Copernicanism. "THE FOUNDATION OF ALL PLANETARY CALCULATIONS FOR OVER A CENTURY" (Sparrow) Caspar 79; Houzeau and Lancaster 12754; Norman 1208; Shirley (World) 335; Zinner 5063. Buchnummer des Verkäufers 21441

The shop is usually but not always open Monday-Saturday 10- 12am and 2-6pm. An appointment is advisable. We have a beautiful collection of old atlases, a wide range of old illustrated books, an extensive stock of antique maps of all parts of the world and a fine collection of prints. We exhibit at a number of important antiquarian map and book fairs as well as antique fairs.