Verwandte Artikel zu A True History of the Assassination of Abraham Lincoln... 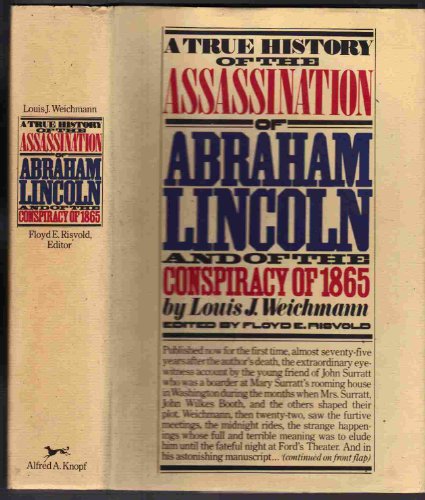 508 pages, illus., appendices, bibliography, notes, index, bds weak, fr bd mostly separated, ins hinges reinforced w/ tape, usual lib marks. Floyd E. Risvold was a manuscript collector, dealer, and historian from Minnesota. He had a great interest in Western Americana history. In 1976, he received the Barondess Lincoln Award for his contribution to the study of the life of Abraham Lincoln. DJ in plastic sleeve, DJ pasted inside boards, DJ soiled, sticker residue on DJ spine plastic sleeve. Weichmann was a boarder at Mary Surratt's rooming house in Washington, and was the chief Government witness against the conspirators in the Lincoln assassination. The manuscript had been in Weichmann's family since his death in 1902; the editor added an appendix of hitherto unpublished material. Louis J. Weichmann (September 29, 1842 - June 5, 1902) was one of the chief witnesses for the prosecution in the trial of the alleged conspirators involved in the Abraham Lincoln assassination. He had been also a suspect in the conspiracy because of his association with Mary Surratt's family. Weichmann testified that on the day Abraham Lincoln was shot, April 14, 1865, he accompanied Mary Surratt to her other property in Surrattsville, (now Clinton, Maryland), where she delivered items that Booth later retrieved hours after the assassination. He further testified that Mary Surratt met with John Wilkes Booth no fewer than three times on that fateful day. Dr. Samuel Mudd, who treated Booth's broken leg on the night Lincoln was killed, and claimed to have no knowledge of the conspiracy, was linked by Weichmann's testimony to the events for which he was tried and found guilty as well. Augustus Howell, a blockade runner who worked with John Surratt, Jr., claimed during the trial that Weichmann had provided classified information obtained by his position at the War Department over to the Confederates. He, supposedly, was hoping to obtain a better job from the Confederate government at Richmond in exchange for his services; however, these accusations were never substantiated. Bestandsnummer des Verkäufers 36494

Titel: A True History of the Assassination of ...