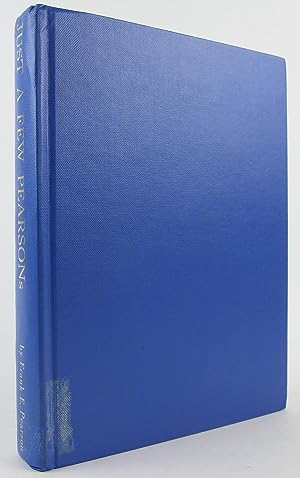 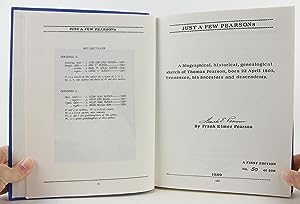 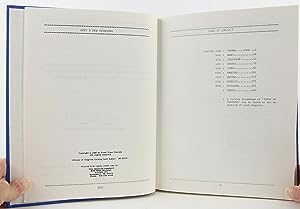 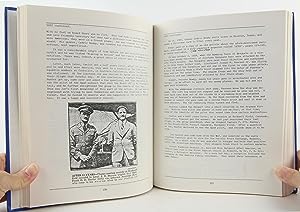 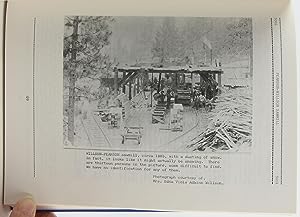 B0006ES7VO 1989 first edition F.E. Pearson (Lodi, California), 8 5/8 x 11 inches tall blue buckram cloth hardcover, no dust jacket (as issued), gilt lettering to spine, copiously illustrated with black-and-white photographs, thoroughly indexed, xviii, 479 pp. A handwritten letter written by the author in the year of issue is laid in. Very slight rubbing and edgewear to covers, with a bit of bumping to the tips. A former genealogical society copy, with a stain to the lower spine where a call number label was apparently removed and a society stamp to the lower part of the blank front free-endpaper as the only evidence of this. Nicely signed on the title page, where this limited edition copy is noted as No. 50 (of 200). Otherwise, internally a very good to near fine copy - clean, bright and unmarked, apparently unread. Note that this is a heavy and oversized book, so additional postage will be required for international or priority orders. ~HH~ [4.0P] A look at the likely ancestry of, and a chronicle of the known descendants of, Thomas Pearson (1805-1891), born probably in Tennessee to Thomas and Nancy Pearson. Pearson married Frances Shank 1825 in Wayne County, Indiana. He is buried in Vinland Cemetery, Douglas County, Kansas. This couple had three children, all born in Indiana. Thomas Pearson married (2) Rhoda Rogers (1821-1883) 1840 in Union Twp., Fulton Co., Indiana. She was a daughter of Eli and Sarah Rogers. Eli Rogers was a Methodist minister for Union Township Four children were born from this union. Descendants live in Kansas, California, Nevada, Iowa, Oregon, Washington and elsewhere. In addition to Pearson and Rogers, surnames which receive extensive coverage (among hundreds):Adkins, Allen, Anderson, Bennett, Bower, Bremmer, Brown, Crane, Dixon, Dollarhide, Gerstenberger, Giles, Green, Harpham, Haskett, Hawkins, Hook, Horner, Howard, James, Lemanske, Marks, McTaggart, Morris, Oakley, Oram, Prackel, Rathbun, Rickman, Ritchey, Roberts, Rood, Schmidt, Shoemaker, Smith, Still, Varnum, Visser, Wade, Wagner, Williams, Willson. Buchnummer des Verkäufers HH-0581-9078