Verwandte Artikel zu The old and new testament: connected in the history...

Home Prideaux, Humphrey The old and new testament: connected in the history of the Jews ... 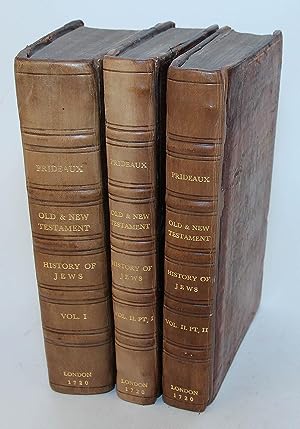 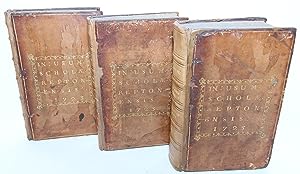 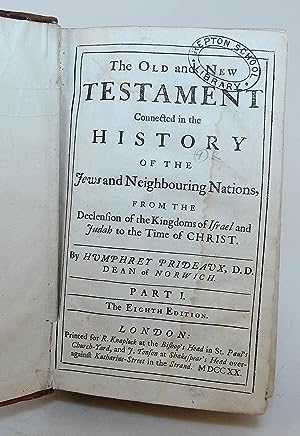 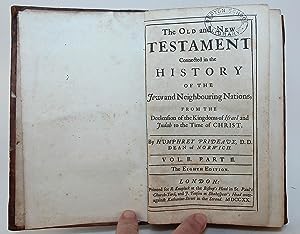 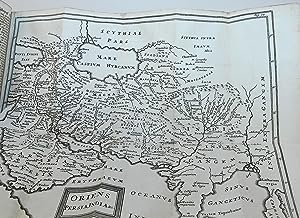 The old and new testament: connected in the history of the Jews and neighbouring nations, from the declension of the Kingdoms of Israel & Judah to the time of Christ (2 volumes in three books)

B00CJUSWAE 1720 eighth edition 'Printed for R. Knaplock at the Bishop's Head in St. Paul's Church-Yard, and F. Tonson at Shakespear's Head Over-Against Katharine Street in the Strand' (London), three 5 x 7 7/8 inches tall full leather bound volumes, gilt design to front covers, five raised bands and gilt lettering to spines, xxvi, 574, 16 pp. [chronology]; xxiv, 368 pp.; ii, 369-668 pp. + 32 pp. [chronology] + 58 pp. [index]. Originally bound in 1723 for the renowned Repton School in the English Midlands, with a gilt-embossed notation of this in Latin to the front boards. The set has been elegantly respined, using the original boards. The boards are rubbed, bumped, stained and edgeworn. Repton School Library bookplates to front free-endpapers and stamps to title pages. Light dampstains to to first 30 pages of Volume 1, scattered tanning and foxing throughout all the books, especially to title pages, with only a handful of small marginal notations through the three volumes. Most pages are remarkably bright and supple. Volume 1 has one textual engraving, of the Temple of Israel, as well as three torn but extant folding maps, with the remnants of another four folding illustrations or maps which have been torn out. (Few of the library holdings of this set have any of the fold-out maps extant.) In all other respects, a very good, complete set - clean and unmarked, with a splendid shelf appearance. International and Priority Orders please note that this set requires additional postage - contact us for an exact shipping amount. ~KKK~ Humphrey Prideaux (1648 - 1724) was an English churchman and orientalist, Dean of Norwich from 1702. 'The Old and New Testament connected in the History of the Jews' was a significant work which drew on James Ussher (a prolific Irish scholar who most famously published a chronology that purported to establish the time and date of the creation as the night preceding Sunday, 23 October 4004 BC, according to the proleptic Julian calendar). This work by Prideaux was among the earliest English books to use the term 'Vulgar Era,' though Kepler used the term as early as 1635. It covered the historical interval between the Old and New Testaments, and led to a controversy between Prideaux and his cousin, Walter Moyle (English politician and political writer, an advocate of classical republicanism). Swiss theologian and Biblical scholar Jean Le Clerc (1657 - 1736) wrote a critical examination of it, which was published in English in 1722. Buchnummer des Verkäufers KKK-0241-380

Titel: The old and new testament: connected in the ...