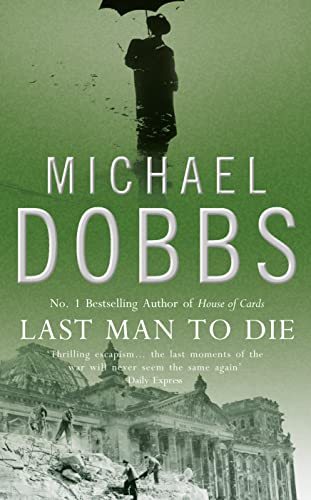 ‘Truly the great escape... quite simply, a good old-fashioned adventure that rattles along to a cataclysmic finale.’
Daily Mail

‘Thrilling escapism... what a corker, with a cunning twist in the tail. After this, the last moments of the war will never seem the same again.’
Daily Express

An acclaimed historical thriller by the author of HOUSE OF CARDS – a highly original, fast-moving tale that gives an unexpected twist to the last days of the Second World War. Now reissued in a new cover style.

Spring 1945. The final weeks of the war. One man holds the secret that will decide the fate of post-war Europe: Peter Hencke, an unlikely hero, a German prisoner-of-war on the run.

Refusing to wait for peace and the freedom it will finally bring, Hencke is fired by a personal mission that drives him to risk everything in his lonely, treacherous journey across wartime Britain, back through the battle-torn remnants of the Third Reich – to the very heart of encircled Berlin.

One man faced by the mightiest armies ever assembled, pursued by the most powerful and ruthless men in Europe – and helped and loved by two of the most extraordinary women. The secret of Peter Hencke will be hidden until the very last moments of the war.