Verwandte Artikel zu The Fellowship of the Ring: v.1 (The Lord of the Rings) 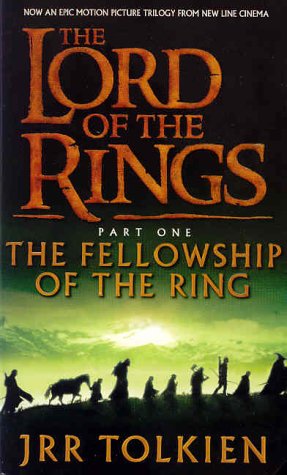 Texto en inglés. Tapa blanda de editorial ilustrada. Sin subrayados ni anotaciones. Buen estado de conservación. A disparate group of people gather together to transport a ring to the one place that could destroy it and stop an evil spirit from gaining control of the world.

‘An extraordinary book. It deals with a stupendous theme. It leads us through a succession of strange and astonishing episodes, some of them magnificent, in a region where everything is invented, forest, moor, river, wilderness, town and the races which inhabit them.’
The Observer

‘Among the greatest works of imaginative fiction of the twentieth century.’
Sunday Telegraph

The first part of Tolkien’s epic masterpiece, The Lord of the Rings, featuring an exclusive cover image from the film

Impossible to describe in a few words, JRR Tolkien’s great work of imaginative fiction has been labelled both a heroic romance and a classic fantasy fiction. By turns comic and homely, epic and diabolic, the narrative moves through countless changes of scene and character in an imaginary world which is totally convincing in its detail. Tolkien created a vast new mythology in an invented world which has proved timeless in its appeal.

To celebrate the release of the major motion picture trilogy, we will be reissuing the A-format paperbacks with exclusive images from the films on the covers, the first of which being The Fellowship of the Ring, in which the young hobbit, Frodo, is bequeathed a magical ring from his Uncle Bilbo, and learns that he must take it into the land of the Dark Lord, Sauron, and cast it into the Cracks of Doom.

The Fellowship of the Ring : Being the First Part of the Lord of the Rings

Buchbeschreibung Paperback. Zustand: New. New - May Have Minor Shelf Wear To Edges. - For More Information On Condition. Please See All Photos. - One Ring To Rule Them All, One Ring To Find Them, One Ring To Bring Them All And In The Darkeness Bind Them In Ancient Times The Rings Of Power Were Crafted By The Elven-Smiths, And Sauron, The Dark Lord, Forged The One Ring, Filling It With His Own Power So That He Could Rule All Others. But The One Ring Was Taken From Him, And Though He Sought It Throughout Middle-Earth, It Remained Lost To Him. After Many Ages It Fell Into The Hands Of Bilbo Baggins, As Told In The Hobbit. In A Sleepy Village In The Shire, Young Frodo Baggins Finds Himself Faced With An Immense Task, As His Elderly Cousin Bilbo Entrusts The Ring To His Care. Frodo Must Leave His Home And Make A Perilous Journey Across Middle-Earth To The Cracks Of Doom, There To Destroy The Ring And Foil The Dark Lord In His Evil Purpose. Bestandsnummer des Verkäufers 005056