The Return of the King (Collins Modern Classics): v.3 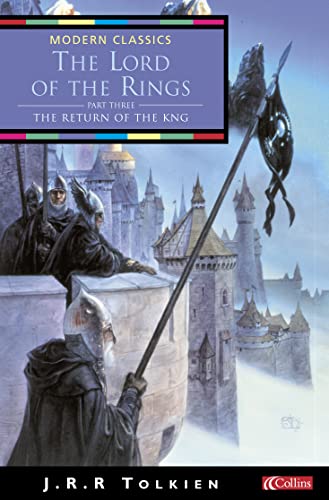 ‘The English-speaking world is divided into those who have read The Lord of the Rings and The Hobbit and those who are going to read them.’ Sunday Times

‘A story magnificently told, with every kind of colour and movement and greatness.’ New Statesman

‘Masterpiece? Oh yes, I’ve no doubt about that.’ Evening Standard

The Return of the King is the third volume in J.R.R. Tolkien’s epic adventure, The Lord of the Rings, voted Book of the Century in major polls.

The armies of the Dark Lord are massing as his evil shadow spreads ever wider. Men, Dwarves, Elves and Ents unite forces to do battle agains the Dark. Meanwhile, Frodo and Sam struggle further into Mordor in their heroic quest to destroy the One Ring.

Buchbeschreibung Soft cover. Zustand: New. No Jacket. 1st Edition. Paperback; London UK. Book Condition: New. Dust Jacket Condition: None. First Edition. 415 pp. Appears Unread. Without dedication: Numbered Line: 10-1. No wear to spine and corners. IN EXCELLENT CONDITION, PLEASE CONTACT US BEFORE ORDERING THIS BOOK TO CONFIRM BOOK CONDITION AND EDITION (most of our books are 1st editions). We can send you photos of this book with a detailed description. No foxing. Shipping is normally same day from the UK. "UK BASED SELLER ALL OVERSEAS SHIPPING VIA AIRMAIL". If you do not want this service please make it clear to Abebooks you wish by Ship. In Stock.- THANKS! We do not stock Ex-Library or Book Club editions. We offer a money back guarantee if you are not fully satisfied, please contact us if you have any questions. Bookseller Inventory #O. 121217164376. Bestandsnummer des Verkäufers 003432

The Return of the King (Lord of the Rings, Vol. 3)