Wilder, Thornton The Ides Of March

The Ides Of March 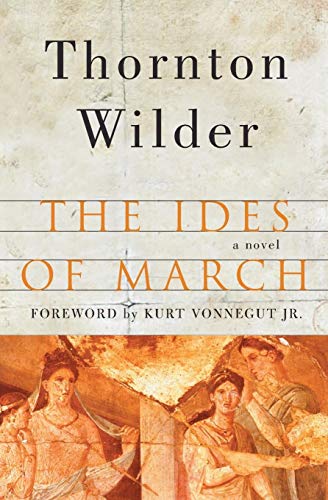 Drawing on such unique sources as Thornton Wilder's unpublished letters, journals, and selections from the extensive annotations Wilder made years later in the margins of the book, Tappan Wilder's Afterword adds a special dimension to the reissue of this internationally acclaimed novel.

The Ides of March, first published in 1948, is a brilliant epistolary novel set in Julius Caesar's Rome. Thornton Wilder called it "a fantasia on certain events and persons of the last days of the Roman republic." Through vividly imagined letters and documents, Wilder brings to life a dramatic period of world history and one of history's most magnetic, elusive personalities.

In this inventive narrative, the Caesar of history becomes Caesar the human being. Wilder also resurrects the controversial figures surrounding Caesar -- Cleopatra, Catullus, Cicero, and others. All Rome comes crowding through these pages -- the Rome of villas and slums, beautiful women and brawling youths, spies and assassins.

The Ides of March (Paperback or Softback)

The Ides of March (Paperback)

Buchbeschreibung Paperback. Zustand: New. Language: English. Brand new Book. "Mr. Wilder has brought to his character the warmth which was totally lacking in the Caesar of schoolbooks and Shakespeare, and in his hero's destruction there is the true catharsis." --Edward Weeks, AtlanticFirst published in 1948, The Ides of March is a brilliant epistolary novel of the Rome of Julius Caesar. Through imaginary letters and documents, Wilder brings to life a dramatic period of world history and one of its magnetic personalities. In this novel, the Caesar of history becomes Caesar the human being as he appeared to his family, his legions, his Rome, and his empire in the months just before his death. In Wilder's inventive narrative, all Rome comes crowding through his pages. Romans of the slums, of the villas, of the palaces, brawling youths and noble ladies and prostitutes, and the spies and assassins stalking Caesar in his Rome.--Times Literary Supplement [London]. Bestandsnummer des Verkäufers APC9780060088903

The Ides of March (Paperback)