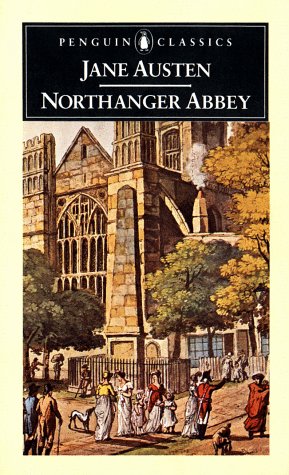 Jane Austen, the daughter of a clergyman, was born in Hampshire in 1775, and later lived in Bath and the village of Chawton. As a child and teenager, she wrote brilliantly witty stories for her family's amusement, as well as a novella, Lady Susan. Her first published novel was Sense and Sensibility, which appeared in 1811 and was soon followed by Pride and Prejudice, Mansfield Park and Emma. Austen died in 1817, and Persuasion and Northanger Abbey were published posthumously in 1818.

Northanger Abbey follows seventeen-year-old Gothic novel aficionado Catherine Morland and family friends Mr. and Mrs. Allen as they visit Bath, England. Catherine is in Bath for the first time. There she meets her friends such as Isabella Thorpe, and goes to balls. Catherine finds herself pursued by Isabella's brother, the rather rough-mannered, slovenly John Thorpe, and by her real love interest, Henry Tilney. She also becomes friends with Eleanor Tilney, Henry's younger sister. Henry captivates her with his view on novels and his knowledge of history and the world. General Tilney (Henry and Eleanor's father) invites Catherine to visit their estate, Northanger Abbey, which, from her reading of Ann Radcliffe's gothic novel The Mysteries of Udolpho, she expects to be dark, ancient and full of Gothic horrors and fantastical mystery. (wikipedia.org)