Riordan Rick The Burning Maze. The Trials Of Apollo Book 3

The Burning Maze. The Trials Of Apollo Book 3 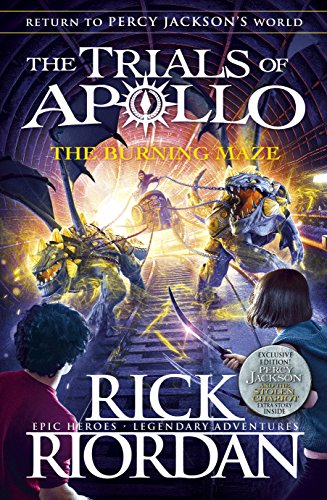 I WAS A GOD, ONCE. UNTIL I WAS CAST OUT BY MY FATHER, ZEUS.

My way out? A series of scary and dangerous trials, of course.

For my third mission, I must:

Journey through the Labyrinth to free an Oracle who only speaks in puzzles.

Is that all? No, I've to do everything without any of my godly powers. Wonderful. Looks like I'll be needing all the help I can get. From new friends, and old . . .

Clarisse, daughter of Ares, the Greek god of war, needs Percy Jackson's help. Her father's chariot has been stolen and she has to get it back by sunset.

The only hitch? The chariot-jackers are none other than her terrifying immortal brothers Phobos and Deimos. Can Percy and Clarisse get the chariot back before it's too late?

PERCY JACKSON AND THE STOLEN CHARIOT

Rick Riordan, dubbed 'storyteller of the gods' by Publishers Weekly, is the author of five New York Times number-one bestselling book series with millions of copies sold throughout the world: Percy Jackson, the Heroes of Olympus and the Trials of Apollo, based on Greek and Roman mythology; the Kane Chronicles, based on Egyptian mythology; and Magnus Chase, based on Norse mythology. Percy Jackson and the Lightning Thief, Rick's first novel featuring the heroic young demigod, won the Red House Children's Book Award and is now a blockbuster film franchise starring Logan Lerman.

To learn more about Rick and his books, you can visit him at www.rickriordan.co.uk or follow him on Twitter @camphalfblood.

The Burning Maze (The Trials Of Apollo Book 3)