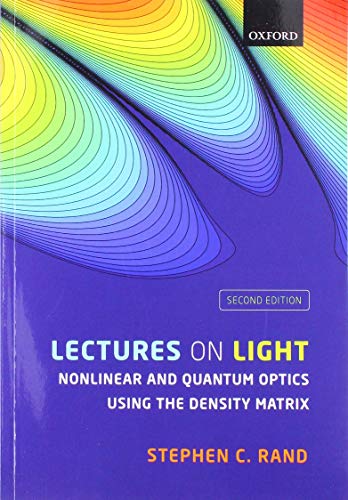 CrŪticas:
Review from previous edition A textbook which thoroughly introduces the density matrix formalism and applies it to a range of topics of current interest constitutes a 'missing link' among quantum optics textbooks. (Christoph Becher, Saarland University, Germany)

It is a significant advantage that the author has written a text that can be used by practitioners in the field with a wide variety of backgrounds, from conventional physics to bio-physicists and photo-chemists. (Ifan G. Hughes, University of Durham, UK)
ReseŮa del editor:
This book attempts to bridge in one step the enormous gap between introductory quantum mechanics and the research front of modern optics and scientific fields that make use of light. Hence, while it is suitable as a reference for the specialist in quantum optics, it will also be useful to the non-specialists from other disciplines who need to understand light and its uses in research. With a unique approach it introduces a single analytic tool, namely the density matrix, to analyze complex optical phenomena encountered in traditional as well as cross-disciplinary research. It moves swiftly in a tight sequence from elementary to sophisticated topics in quantum optics, including laser tweezers, laser cooling, coherent population transfer, optical magnetism, electromagnetically induced transparency, squeezed light, quantum information science and cavity quantum electrodynamics. A systematic approach is used that starts with the simplest systems - stationary two-level atoms - then introduces atomic motion, adds more energy levels, and moves on to discuss first-, second-, and third-order coherence effects that are the basis for analyzing new optical phenomena in incompletely characterized systems.

Unconventional examples and original problems are used to engage even seasoned researchers in exploring a mathematical methodology with which they can tackle virtually any new problem involving light. An extensive bibliography makes connections with mathematical techniques and subject areas which can extend the benefit readers gain from each section.

This revised edition includes over 40 new problems (for a total of 110 original problems with an instructor's solution manual), as well as completely new sections on quantum interference, Fano resonance, optical magnetism, quantum computation, laser cooling of solids, and irreducible representation of magnetic interactions. Literature references to current ultrafast science, nonlinear optics, x-ray and high-field physics topics have doubled at the end of chapters 5, 6, and 7; the subject index has also been significantly expanded.

Buchbeschreibung Zustand: New. Brand New Original US Edition.We Ship to PO BOX Address also. EXPEDITED shipping option also available for faster delivery.This item may ship from the US or other locations in India depending on your location and availability. Bestandsnummer des Verkšufers ABBBE-2750

Buchbeschreibung Zustand: New. Brand New Original US Edition. Customer service! Satisfaction Guaranteed. This item may ship from the US or our Overseas warehouse depending on your location and stock availability. We Ship to PO BOX Location also. Bestandsnummer des Verkšufers ABST-2750

Lectures on Light: Nonlinear and Quantum Optics us Format: Paperback