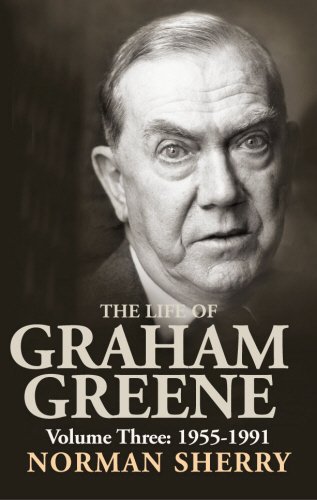 "Sherry, continues to pursue his quarry to rewarding effect, ending with a flourish what must surely be one of literature's finest biographies." (William Trevor Spectator)

"Sherry can be proud of his stupendous achievement, and Greene himself could want no better or more accurate a monument than this." (Simon Heffer Literary Review)

"Representing literary biography at its finest, Sherry's book surpasses others in the field...whereas other biographies are as entertaining as their subject's real-life experiences, but rarely their imagination, Sherry enhances Green's intellectual achievement." (Observer)

This third and final volume of Norman Sherry's biography takes Graham Greene from the very real peril of Cuba to the rigours of the Belgian Congo, through tumultuous Haiti, Nicaragua and Panama, his confrontation with the French mafia, and then into Spain, up to a quiet death at eighty-six, in Switzerland.

Sherry illuminates Greene's mind and methods, models and motivation, from his heady success and surprising failure as a playwright; the wrenching loss of his beloved Catherine Walston and the deep but different love affairs that followed; to his final forays into the evil, fulminating trouble spots of the world which beckoned as sirens all his days.

With exclusive access to Greene's letters, journals and dream-diaries, Norman Sherry has written a monumental tribute to one of the greatest of English writers. The three volumes of The Life of Graham Greene will remain the standard work on Greene for decades to come.

Buchbeschreibung Hardcover. Zustand: Very Good. Very Good: a copy that has been read, but is in excellent condition. Pages are intact and not marred by notes or highlighting. The spine remains undamaged. Most items will be dispatched the same or the next working day. Bestandsnummer des Verkäufers wbb0021176398

Buchbeschreibung Zustand: Good. 1st. Ships from the UK. Former library book; may include library markings. Used book that is in clean, average condition without any missing pages. Bestandsnummer des Verkäufers 345471-6

Buchbeschreibung Zustand: Very Good. 1st. Ships from the UK. Former library book; may include library markings. Used book that is in excellent condition. May show signs of wear or have minor defects. Bestandsnummer des Verkäufers GRP87763703

Buchbeschreibung Hardcover. Zustand: Used; Good. **Simply Brit** Shipped with Premium postal service within 24 hours from the UK with impressive delivery time. We have dispatched from our book depository; items of good condition to over ten million satisfied customers worldwide. We are committed to providing you with reliable and efficient service at all times. Bestandsnummer des Verkäufers mon0001724475

Buchbeschreibung Hardback. Zustand: Very Good. The book has been read, but is in excellent condition. Pages are intact and not marred by notes or highlighting. The spine remains undamaged. Bestandsnummer des Verkäufers GOR001700650

Buchbeschreibung Hardback. Zustand: Good. The book has been read but remains in clean condition. All pages are intact and the cover is intact. Some minor wear to the spine. Bestandsnummer des Verkäufers GOR001883096