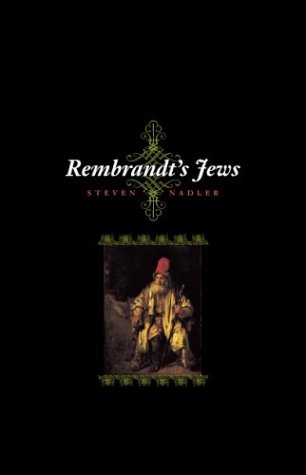 This work examines both the legend and the reality of Rembrandt's relationship to Jews and Judaism, taking a close look at his paintings, etchings and drawings, and discussing his intellectual and socail life.

There is a popular and romantic myth about Rembrandt and the Jewish people. One of history's greatest artists, we are often told, had a special affinity for Judaism. With so many of Rembrandt's works devoted to stories of the Hebrew Bible, and with his apparent penchant for Jewish themes and the sympathetic portrayal of Jewish faces, it is no wonder that the myth has endured for centuries.

Rembrandt's Jews puts this myth to the test as it examines both the legend and the reality of Rembrandt's relationship to Jews and Judaism. In his elegantly written and engrossing tour of Jewish Amsterdam—which begins in 1653 as workers are repairing Rembrandt's Portuguese-Jewish neighbor's house and completely disrupting the artist's life and livelihood—Steven Nadler tells us the stories of the artist's portraits of Jewish sitters, of his mundane and often contentious dealings with his neighbors in the Jewish quarter of Amsterdam, and of the tolerant setting that city provided for Sephardic and Ashkenazic Jews fleeing persecution in other parts of Europe. As Nadler shows, Rembrandt was only one of a number of prominent seventeenth-century Dutch painters and draftsmen who found inspiration in Jewish subjects. Looking at other artists, such as the landscape painter Jacob van Ruisdael and Emmanuel de Witte, a celebrated painter of architectural interiors, Nadler is able to build a deep and complex account of the remarkable relationship between Dutch and Jewish cultures in the period, evidenced in the dispassionate, even ordinary ways in which Jews and their religion are represented—far from the demonization and grotesque caricatures, the iconography of the outsider, so often found in depictions of Jews during the Middle Ages and the Renaissance.

Through his close look at paintings, etchings, and drawings; in his discussion of intellectual and social life during the Dutch Golden Age; and even through his own travels in pursuit of his subject, Nadler takes the reader through Jewish Amsterdam then and now—a trip that, under ever—threatening Dutch skies, is full of colorful and eccentric personalities, fiery debates, and magnificent art.