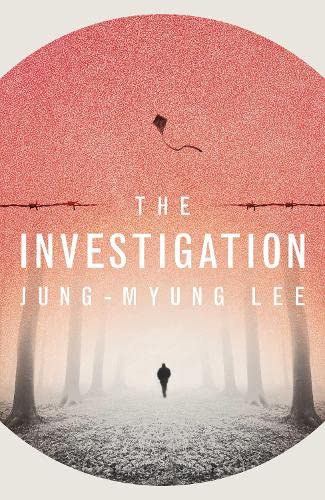 Jung-Myung Lee's extraordinary THE INVESTIGATION, translated by Chi-Young Kim, is set in a period of Korean history that isn't widely known in the West. In 1944, with the region still under Japanese rule, Korean inmates of Fukuoka prison are not allowed to use their own language. A young guard is ordered to find the killer of another guard and stumbles on a sinister conspiracy - and the work of a Korean poet who writes clandestine verses of rare beauty. Inspired by the work of Yun Dong-ju, the dissident Korean writer who died in Fukuoka in 1945, this is a heart-wrenching novel with many unexpected twists. * Sunday Times * In Jung-Myung Lee's The Investigation, the equally merciless Japanese occupation of Korea drives a Second World War mystery set in Fukuoka prison. A forbidden passion for poetry binds the three protagonists: the jailed Korean bard Yun Dong-ju, whose life inspired the novel; the outwardly tough guard Sugiyama, and Yuichi, the bookish Japanese narrator. Lee's story celebrates the power of poetry, of books and of reading, to lend us a "sixth sense" that can heal and transform even in the harshest times. In this hellish jail, poetry both subverts and redeems, and "Only the purest language could testify about the most brutal era". Now, Britain's penal authorities become the "executioners of literature" as they ban the gift of books. So this Korean bestseller deserves to fly across our own prison walls. * Independent * Not just a whodunnit that provides the relief of a clear resolution. The book also tells the story of Japan's wartime history and is inspired by the real-life jailed Korean poet and dissident Yun Dong-ju, whose work is quoted throughout . . . a gripping book. * Financial Times * I was gripped by The Investigation. It came at me from nowhere and consumed me. It's a thriller, and a war story, and so much more besides. I tore through the last 100 pages, my heart literally racing at times. An intense, captivating achievement, inspired by reality * Matt Haig, author of The Humans and The Radleys * This novel mesmerizes the readers with its prison setting, complex characters, solid structure, and foreshadowing through a wide range of literary devices. Readers who have enjoyed Marcus Zusak's The Book Thief or Stephen King's Shawshank Redemption will also like The Investigation. * The List * 'I adored this one with a fiery passion . . . Absolutely addictive reading, with some beautiful prose I was fully immersed from start to finish . . . Novels like this do not come along that often. I loved every minute of it' * lizlovesbooks.com * This spellbinding novel from Korean author Jung-Myung Lee, translated by Chi-Young Kim, has been inspired by the life of dissident Korean poet Yun Dong-ju and his posthumously published body of work, with several of his poems featured here. * Northern Echo * Extraordinary . . . There are already comparisons with the like a Carlos Ruiz Zafon's The Shadow of the Wind (the literary elements) and Stephen King's Rita Hayworth and Shawshank Redemption (for more obvious reasons). The book also has more tangential similarities to the likes of Umberto Eco's The Name of the Rose and Ken Kesey's One Flew Over the Cuckoo's Nest. Yet, it retains a sense of freshness and Lee manages to surprise and delight as he weaves a tale based on the life of one of Korea's best-known poets. Like Shawshank ("I hope the Pacific is as blue as it has been in my dreams. I hope."), The Investigation is a story about hope in the least likely of situations . . . Based on a true story, The Investigation is a beautiful, and often heart-breaking novel of despair and the hope that ideas and imagination can bring. A literary masterpiece masquerading as a mystery novel (something else is shares with Eco's The Name of the Rose), it gives us a brief glimpse of hell before showing us the beauty in the everyday . . . Jung-Myung Lee is, by all accounts, a bestseller in his native Korea. The Investigation shows that his work has international appeal. If you've enjoyed any of the novels that have been mentioned in this review - or indeed, the excellent films that have been produced from them - then this is a book not to be missed. * ReaderDad blog * There's been a move on of late to introduce Western readers to Korea's literary traditions. However, up until now we've not come across many Korean crime pieces. The Investigation fits the bill, and more... it is absorbing, and easily one of the most moving books I have read this year. It is the story of a personal transformation - of starting to question the things you have always taken for granted, standing up to authority and to your own culture. But it is also more far-reaching than that. It is a brave quest for freedom and humanity in a world torn apart by conflict and brutality. It is a book about man's eternal quest for meaning, beauty and the need to be understood. An unconventional crime novel, a thrilling literary novel, and a book which will stay with you forever. * Crime Fiction Lover blog *

Longlisted for the Independent Foreign Fiction Prize Fukuoka Prison, 1944. Beyond the prison walls the war rages; inside a man is found brutally murdered. Yuichi Watanabe, a young guard with a passion for reading, is ordered to investigate. The victim, Sugiyama - also a guard - was feared and despised throughout the prison and inquiries have barely begun when a powerful inmate confesses. But Watanabe is unconvinced; and as he interrogates both the suspect and Yun Dong-ju, a talented Korean poet, he begins to realise that the fearsome guard was not all he appeared to be . . . As Watanabe unravels Sugiyama's final months, he begins to discover what is really going on inside this dark and violent institution, which few inmates survive: a man who will stop at nothing to dig his way to freedom; a governor whose greed knows no limits; a little girl whose kite finds her an unlikely friend. And Yun Dong-ju - the poet whose works hold such beauty they can break the hardest of hearts. As the war moves towards its devastating close and bombs rain down upon the prison, Watanabe realises that he must find a way to protect Yun Dong-ju, no matter what it takes. This decision will lead the young guard back to the investigation - where he will discover a devastating truth . . . At once a captivating mystery and an epic lament for lost freedom and humanity in the darkest of times, The Investigation - inspired by a true story - is a sweeping, gripping tale perfect for fans of The Shadow of the Wind.

Buchbeschreibung Hardcover. Zustand: New. Zustand des Schutzumschlags: New. 1st Edition. London: Mantle (2014). First edition. First printing. Hardbound. New/New. A pristine unread copy (without marks or bruises or smells or any other defect). Comes with archival-quality mylar dust jacket cover (not clipped, of course). Shipped in well-padded box. Purchased new and opened only for author to sign, no inscriptions, just the author's name directly on the title page. SIGNED BY AUTHOR on title page and dated by him in April 2014, the month of publication. You cannot find a better copy. Author has signed in Korean and English. 0.0. Signed by Author(s). Bestandsnummer des Verkäufers 04-2014-30