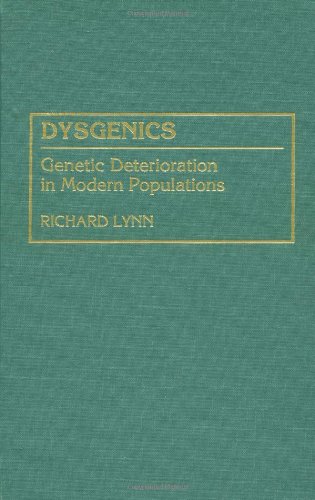 In the mid-19th century a number of biological and social scientists came to believe that the genetic quality of the populations of the Western world was deteriorating due to the relaxation of natural selection, the process by which nature eliminates the unfit in each generation by reducing their fertility and by early death. Francis Galton, Darwin's young cousin, argued for consciously designed selection through which human societies would control and improve their own genetic quality. For this consciously designed selection, Galton in 1883 proposed the term eugenics. Almost a century later, William Schockley proposed the term dysgenics for the genetic deterioration that eugenics was designed to correct. Although the view that the populations of Western nations were deteriorating genetically and that steps needed to be taken to correct this came to be widely accepted in the first half of the 20th century, by the time Schockley wrote, a reaction had set in and eugenics was almost universally dismissed. In this book, Richard Lynn reviews the history of the eugenics movement and argues that, in repudiating eugenics, an important truth has been lost. By showing weaknesses in the arguments against the theory, he seeks to rehabilitate the argument that genetic deterioration is occurring in western populations and in most of the developing world. A controversial book, it should stimulate debate not only among biologists, psychologists, educators and those involved in setting social policy, but among all readers concerned with contemporary social issues.

RICHARD LYNN is Director of the Ulster Institute for Social Research, Coleraine, Northern Ireland. He graduated in Psychology at the University of Cambridge and has held positions as Professor of Psychology at the Economic and Social Research Institute, Dublin, and at the University of Ulster. Among his earlier books are Personality and National Character and Educational Achievement in Japan.

Buchbeschreibung Zustand: Good. Good+; Hardcover; Very light overall wear to the covers; Moderate foxing to the textblock edges; Name/address to the first endpaper, otherwise the endpapers and all text pages are clean and unmarked; The binding is excellent with a straight spine; This book will be shipped in a sturdy cardboard box with foam padding; Medium Format (8.5" - 9.75" tall); Red cloth covers with title in gold lettering on a black backgound; 1996, Praeger Publishing; 256 pages; "Dysgenics: Genetic Deterioration in Modern Populations (Human Evolution, Behavior, and Intelligence)," by Richard Lynn. Bestandsnummer des Verkäufers SKU-0029AF07102012