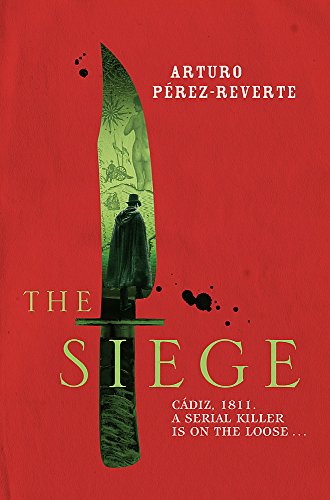 That rare thing, an old-fashioned, proper, big novel: The Siege is as much a thickly described historical fiction as a many-layered crime novel. The judges admired the claustrophobia of the siege of Cadiz (for both sides) during the Peninsular War that forms the detailed background to the investigation and the author's serious ethical intentions. To quote Orson Welles, Who knows what evil lurks in the hearts of men? (THE CRIME WRITERS' ASSOCIATION)

This is a big and bold novel, rich in character and incident (Nick Rennison THE SUNDAY TIMES)

I was totally drawn in. I felt as though I was living through the siege with the characters - the fear, the hunger, the pretence of normality when a bomb might kill you at any moment. We moved from high-life at the theatre to low in the taverns, from policeman to spy, from Spanish lines to French. I loved the scenes at sea, which were very vividly done. I felt I came to know the characters... This is more novel than crime story, with the murders being a strand in a much larger story, and it's a challenging read - but well worth the effort. If you want something that will engross you wholly in another world, try this. (MYSTERY PEOPLE)

Arturo Perez-Reverte's bold new thriller...The Siege is his best yet: an ambitious intellectual thriller peopled with colourful rogues and antiheroes, meticulous in its historical detail, with a plot that rattles along to its unexpected finale (Stephanie Merritt THE OBSERVER)

Peopled with a cast that would not be out of place in an Almodovar film, Perez-Reverte's novel is an intelligent thriller packed with intrigue and romance (Kathy Stevenson DAILY MAIL)

Arturo Perez-Reverte has long been Spain's most popular, inventive writer of historical fiction... this is a big and bold novel, rich in character and incident (Nick Rennison THE SUNDAY TIMES)

Pťrez Reverte recreates the whole world through unforgettable characters, notably Lolita Palma, a lone woman running the family merchant house. History, adventure and philosophy. Unless your Spanish runs to terms of a nautical nature, this is best read in translation (Judie Newman, professor of American Studies at the University of Nottingham TIMES HIGHER EDUCATION SUPPLEMENT)

Winner of the CWA International dagger 2014

CŠdiz, 1811. Spain is battling for independence while America is doing the same. But in the streets of the most liberal city in Europe other battles are taking place. A serial killer is on the loose, flaying young women to death. Each of these murders takes place near the site where a French bomb has just fallen. It is the job of policeman Rogelio Tizon to find the murderer and avoid public scandal in a city already posied on the brink.

CŠdiz is a complex chessboard on which an unseen hand is moving the pieces that will decide the fate of its protagonists: a corrupt and brutal policeman; the female heir to important shipping company; an unscrupulous corsair captain; a taxidermist who is also a spy, a hardened soldier, and an eccentric French artilleryman.

With all the intrigue and romance of Perez-Reverte's bestsellers, THE DUMAS CLUB and THE FLANDERS PANEL, THE SIEGE is the story of a city and a people who will never be the same again.

Buchbeschreibung Paperback. Zustand: Very Good. The book has been read, but is in excellent condition. Pages are intact and not marred by notes or highlighting. The spine remains undamaged. Bestandsnummer des Verkšufers GOR005118319

Buchbeschreibung Paperback. Zustand: Good. The book has been read but remains in clean condition. All pages are intact and the cover is intact. Some minor wear to the spine. Bestandsnummer des Verkšufers GOR005344078

Buchbeschreibung Zustand: Good. Ships from the UK. Former library book; may include library markings. Used book that is in clean, average condition without any missing pages. Bestandsnummer des Verkšufers GRP73232542