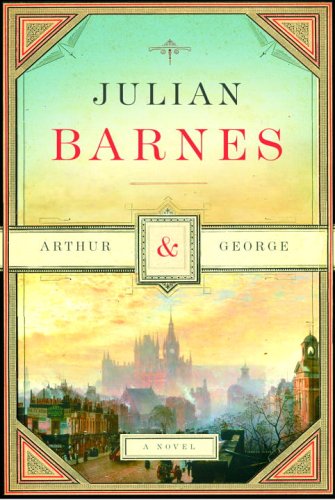 Set against the backdrop of the British Empire, an intriguing novel by the author of Flaubert's Parrot chronicles the lives of two boys--George, the son of a Midlands vicar, and Arthur, growing up in Edinburgh--one who is forgotten by history, and one who becomes the creator of the world's most famous detective, as they pursue their separate destinies until they meet in a remarkable alliance. 100,000 first printing.

Born in Leicester, England, in 1946, Julian Barnes is the author of two books of stories, two collections of essays, a translation of Alphonse Daudet’s In the Land of Pain, and nine previous novels. In France, he is the only writer to have won both the Prix Médicis and the Prix Fémina, and in 2004 he became a Commandeur de l’Ordre des Arts et des Lettres. In England his honors include the Somerset Maugham Award and the Geoffrey Faber Memorial Prize. He has also received the E. M. Forster Award from the American Academy and Institute of Arts and Letters. He lives in London.

Buchbeschreibung Hardcover. Zustand: New. Zustand des Schutzumschlags: New. 1st Edition. Synopsis: From one of England s most esteemed novelists, an utter astonishment that captures an era through one life celebrated internationally and another entirely forgotten. In the vast expanse of late-Victorian Britain, two boys come to life: George, the son of a Midlands vicar, and Arthur, in shabby genteel Edinburgh, both of them feeling at once near to and impossibly distant from the beating heart of Empire. One falls prey to a series of pranks en route to a legal vocation, while the other studies medicine before discovering a different calling entirely, and it is years before their destinies are entwined in a mesmerizing alliance. We follow each through outrageous accusation and unrivaled success, through faith and perseverance and dogged self-recrimination, whether in the dock awaiting complete disgrace or at the height of fame while desperately in love with a woman not his wife, and gradually realize that George is half-Indian and that Arthur becomes the creator of the world s most famous detective. Ranging from London clubs to teeming prisons, from a lost century to the modern age, this novel is a panoramic revelation of things we thought we knew or else had no clue of, as well as a gripping exploration of what goals drive us toward whatever lies in wait an experience resounding with issues, no less relevant today, of crime and spirituality; of identity and nationality; of what we think, what we believe and what we can prove. Intriguing, relentless and, most of all, moving, Arthur & George richly extends the reach and achievement of a novelist described by the Philadelphia Inquirer as a dazzling mind in mercurial flight. Review: A real tour de force from masterful author Julian Barnes is Arthur & George, which was short-listed for the 2005 Man Booker Prize. Late-Victorian Britain is brought to vivid life in the true story of the intersection of two lives: one an internationally famous author, Sir Arthur Conan Doyle, and the other, an obscure country lawyer, George Edalji, son of a Parsi Midlands vicar and a Scottish mother. They start out very differently. Arthur pursues a career in medicine before he discovers that he is really a writer; George, on his way to becoming a lawyer--near-sighted, timid and friendless--is victimized by locals because he is easy to scapegoat--a half-Indian in lily-white Great Wyrley. The victimization of George takes the form of nasty letters, the theft of a school key, and finally, the accusation that he has mutilated animals. Meanwhile, Arthur is becoming more and more famous for creating Sherlock Holmes, whom he tries to kill off once and is forced to resurrect because of his fans' outcry. He marries, fathers two children and then, when his wife is invalided by consumption, falls madly in love for the first time with Jean Leckie. The novel's style is smoothly revelatory. We slowly come to realize that George is half-Indian, that Arthur is the famous Doyle, that the woman he loves, chastely, is not his wife and, sadly, that George will not prevail over the forces ranged against him. When George, desperate to resume his law career after imprisonment, sends Arthur the sad chronicle of his history, Arthur sees immediately that he could not be guilty and sets out to clear his name. This case of George's lifts Arthur from the slough of despond into which he has sunk after his wife, Touie, dies. He is guilt-ridden, constantly wondering if he was attentive enough, if she could possibly have known about Jean. Realizing the immense injustice George has suffered, he is shaken out of lethargy and, in Holmesian fashion, sets out to solve the case. Julian Barnes is a gifted writer of enormous accomplishment. This novel is thoroughly engrossing, filled with Barnes's trademark themes of identity and love, longing and loss, and ultimately, an examination of man's inhumanity to man. --Valerie Ryan "About this title" may belong to another edition of this title. Bestandsnummer des Verkäufers ABE-1632698867007

Buchbeschreibung Hardcover. Zustand: New. Zustand des Schutzumschlags: New. 1st Edition. New York: Alfred A. Knopf [2006]. First American edition. First printing. Hardbound. NEW/NEW. SIGNED by author on title page. A pristine unread copy. Nominated for the 2005 Booker Prize, short-list. The true story of Sir Arthur Conan Doyle s intervention when George, a victimized half-Parsi, is wrongly convicted of criminal behavior. Sir Arthur struggles with guilt over his love for a woman not his wife; only when he can resolve these self-accusatory thoughts is he free to advocate for an innocent man. Comes with archival-quality mylar wrap. Smoke free. Shipped in well padded box. You cannot find a better copy. Author has signed his name only on title page, with no other writing. Signed by Author(s). Bestandsnummer des Verkäufers ppjano6-18