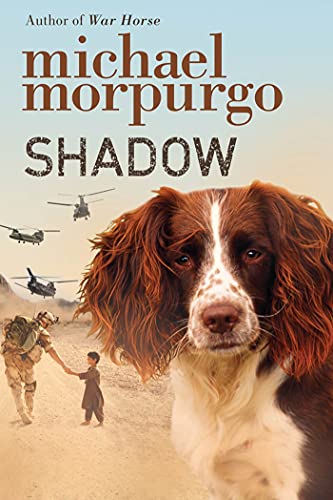 "Shadow is the perfect book for classroom teachers looking for a contemporary tale of the old, sad story: war's devastating ramifications for everyone, including children." --Horn Book

"Shadow succeeds in evoking empathy and inspiring readers to take a stand for their beliefs." --School Library Journal

Author of War Horse, and bestselling storyteller Michael Morpurgo touched our hearts with this beautiful story of a boy, his lost dog, and the lengths he would go to be reunited. This timely story of battle-scarred Afghanistan delivers a masterful portrait of war, love, and friendship.

With the horrors of war bearing down on them, Aman and his mother are barely surviving in an Afghan cave, and staying there any longer will end horribly. The only comfort Aman has is Shadow, the loyal spaniel that shows up from places unknown, it seems, just when Aman needs him most.

Aman, his mother, and Shadow finally leave the destroyed cave in hopes of escaping to England, but are held at a checkpoint, and Shadow runs away after being shot at by the police. Aman and his mother escape--without Shadow. Aman is heart-broken.

Just as they are getting settled as free citizens in England, they are imprisoned in a camp with locked doors and a barbed wire fence. Their only hope is Aman's classmate Matt, his grandpa, and the dream of finding his lost dog. After all, you never lose your shadow.

Buchbeschreibung Hardcover. Zustand: New. New, Usually ships same day Shadow may be a dog, but she is more loke a friend than a dog, like a friendly shadow that does not want to leave us. You never lose your shadow. Bestandsnummer des Verkäufers 424-107

Buchbeschreibung Hard Cover. Zustand: New. Zustand des Schutzumschlags: New. First U.S. Edition, First Printing. Complete number line at copyright page. NON price-clipped dust jacket [$ 16.99]. A stock image [photo] is an accurate representation of the listed book's cover design. 180 pages. Light tan boards, bright copper gilt lettering. With the horrors of war bearing down on them, 14-year-old Aman and his mother are barely surviving in an Afghan cave. Shadow, a spaniel shows up it seems, just when the boy needs him most but he runs away after being shot at by police. Will he return? By the author of War Horse. Media Mail, Priority & some International shipping include free tracking information. Bestandsnummer des Verkäufers 010442