Verwandte Artikel zu The Long, Dark Tea-Time of the Soul

Adams, Douglas The Long, Dark Tea-Time of the Soul

The Long, Dark Tea-Time of the Soul 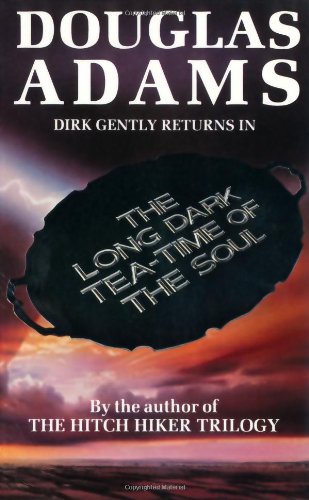 When a passenger check-in desk at Terminal Two, Heathrow Airport, shot up through the roof engulfed in a ball of orange flame the usual people tried to claim responsibility. First the IRA, then the PLO and the Gas Board. Even British Nuclear Fuels rushed out a statement to the effect that the situation was completely under control, that it was a one in a million chance, that there was hardly any radioactive leakage at all and that the site of the explosion would make a nice location for a day out with the kids and a picnic, before finally having to admit that it wasn't actually anything to do with them at all. No rational cause could be found for the explosion -- it was simply designated an act of God. But, think Dirk Gently, which God? And why? What God would be hanging around Terminal Two of Heathrow Airport trying to catch the 15:37 to Oslo? Funnier than Psycho...more chilling than Jeeves Takes Charge ...shorter than War and Peace...the new Dirk Gently novel, The Long Dark Tea-Time of the Soul.

Douglas Adams created all the various and contradictory manifestations of The Hitchhikers Guide to the Galaxy: radio, novels, TV, computer game, stage adaptations, comic book and bath towel. He lectured and broadcast around the world and was a patron of the Dian Fossey Gorilla Fund and Save the Rhino International. Douglas Adams was born in Cambridge, UK and lived with his wife and daughter in Islington, London, before moving to Santa Barbara, California, where he died suddenly in 2001. After Douglas died the movie of Hitchhiker moved out of development hell into the clear uplands of production, using much of Douglas' original script and ideas. Douglas shares the writing credit for the movie with Karey Kirkpatrick.

THE LONG DARK TEA-TIME OF THE SO